"The police are no longer in control"

EDIT:
The city has made national news. Read this article on Yahoo News. Is it getting worse?

I live in Winnipeg, a city associated with high rates of auto theft and murder. In the past three weeks, two babies have been assaulted, a teen murdered and left in a cemetary, numerous beatings and shootings, and a man was set on fire. The family of the man who was immolated told the Winnipeg Sun that "the police are no longer in control".

I don't normally talk about politics on this blog, as I'm not qualified to explain my position well enough. But I do want to say this.

The police are no longer in control. My girlfriend's purse was stolen a week and a half ago, all of her identification, her cellphone, her money. It was stolen out of a locker at the Pan-Am Pool. You can just walk into the pool. You never have to pay. The staff don't even notice you. If I can walk right in, so can a couple teen girls with nothing better to do than steal my girlfriend's stuff.

Fair enough that this is a lesser crime than immolation, but the police haven't called her. At all. She had to spend her time on the phone, tracking down the right guy who knew what was going on, and all she got was an incident number. They didn't ask her for a statement. We have descriptions of the girls. We have the licence plate of the car they drove away in. We did the police work for them, and yet the police are too busy with egregious crimes.

But these awful violent crimes aren't being stopped or prevented. The resources for the police aren't being allocated properly. Dave Chomiak, our Minister of Justice, has created an anti-gang strategy, and a Aboriginal women at risk strategy, neither of which will be given NEW resources. All of the money has to come from other departments, departments which are clearly suffering and unable to do their job properly.

I don't blame the police officers for this. The good men and women who risk their lives every day (especially in our blood-soaked city) are deserving of our respect and our help, certainly not our scorn.

I blame the government. The police, infrastructure and education should always be top priorities for governments, not whether or not the Bombers get a new stadium.

The police are no longer in control in our city. Somehow, we must put the power back into the hands of the justice system. This is not an easy task. Our judicial system is one of the most incomprehensible ones in the world.

Read this article from the Sun. A woman is convicted of owning child pornography and is given a two week sentence. No that isn't a typo. Two weeks in jail.

The police must take control. That is the social contract. Without law and justice, anarchy takes its place.

The Progress of Love 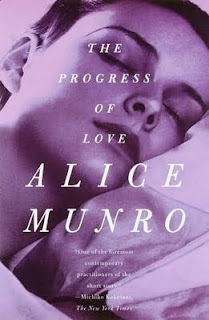 To me, short stories are all about artifice. They are about the creation of a moment, and the subtle way the author brings us to the moment. It seems that most short stories these days work on the subtextual level, rather than at the plot level. It's more about the epiphany that the characters reach or don't reach than about whatever happens, or whatever plot machinations exist. I mean epiphany in the Joycean sense, that is, an illuminating discovery, often putting the person's whole life into a new perspective, changing how they see themselves. An amazing example of this style of short story is any one story from Alice Munro's award-winning collection, The Progress of Love.

These eleven stories gathered together create a vivid tapestry of public and private lives, often jostling together for superiority, juxtaposed and compared. Each story is densely plotted, surprisingly. These stories do not lend themselves to sporadic reading; each one demands to be finished once started.

The highlight of the entire collection is the gripping and poignant story, "The Moon in the Orange Street Skating Rink". It is the narrative of two cousins coming of age in Southern Ontario, it is the story of understanding of the secret internal world of adults and of adult affairs. The two cousins begin their sexual history by experimenting with the cleaning girl that lives and works in their boarding house. It all comes to a head when they think the girl has become pregnant. It is not until late in the main character's life does he understand the emotional ramifications of what has happened.

It would spoil the story to divulge any more of the plot. This isn't to say that the story is rife with melodramatic moments of arguments, love-making, accusations. The betrayal that exists in this story and others by Munro are far more subtle and the consequences far more emotionally devastating.

These stories are dense not just because of the complicated families, or the non-linear and complex timelines, but because the characters are so vividly imagined. In twenty or so pages, Munro deftly implies whole lives that we merely get a glimpse of, and not just of main characters, but colourful secondary actors, coming and going.

It is said often that one of Munro's stories contains more than most novels. It is the artifice and economy that make Munro such a master of the form. With very few words, and those words precisely chosen, she creates worlds out of these lives, these lives wounded and broken by marriages, infidelity, the quiet broken friendships, the lies.

The Progress of Love is a staggering collection of short stories presented by a true master of the form. With her plain but evocative prose, Alice Munro shows us numerous lives with stories to be heard, characters perfectly imagined. It is no wonder that she has been lavished with literary awards, praise, and comparisons to the masters, such as Chekhov. This is highly recommended.

A Fire Upon the Deep I like hard science fiction better than so-called soft science fiction. I assume, like all matters pertaining to geek culture, that the genre boundaries are seemingly arbitrary and therefore, forever argued amongst the fans. For the purposes of this blog, let's define hard science fiction as any sci-fi that features science and technology based on real principles, or are at least properly extrapolated from real principles. Conversely, soft science fiction displays its technology without explanation, and presents science as magic. Often, hard sci-fi is set in the present, or the near-future, that way the author's predictions are accurate, or at least a safe bet. Not very often does a hard sci-fi novel come into contact with the genre of space opera, the much maligned "country cousin" of the sci-fi world. Space opera has given birth to such works as Flash Gordon and Star Wars, both of which we would never call intelligent because of its tech. But there exists smart space opera, and I'd like to review one example of it.


This long introduction brings me to the Hugo Award-winning novel A Fire Upon the Deep by Vernor Vinge. Published in 1993, Vinge's novel postulates a far future where thousands of cultures and races and species exist in the galaxy, but are separated by physical distance measured in "zones of thought". Essentially, this is Vinge's ingenious solution to the Fermi Paradox, as well as a sidestep to the concept of the technological singularity problem. The idea is that the human race will inevitably make a machine that has superhuman intelligence, after which, the machine will continue to improve itself until it's at the point of godhood (in our frame of reference). The technology to come after the moment of creating the superhuman intelligence will end the human era.


Bear with me, I'm going to get to Vinge's novel in a second. We just have to explain the byzantine background of the novel before attempting to explain its plot.


In the galaxy, the zones of thought imply that at the lowest level, technology is stupid and slow. In the middle are faster than light travel, and other sci-fi esque tech, and at the other end is where the super-intelligent transcendent beings are, the ones creating life. These beings, called Powers, are so beyond human that the normal being anywhere else outside of this zone cannot comprehend the Powers' thought process. They are at the god level.


In A Fire Upon the Deep, some human on a research laboratory have accidentally uncovered the means to awakening an older Power, one with vast intelligence and motives far too complex to ever understand. This Power amasses an army through mind-control (or rather, something else, but to give it away would spoil the novel), and tears through the galaxy.


Okay, still with me? Some humans escape the laboratory with the countermeasure, but are stranded on a "slow" planet, populated by strange aliens. These marooned children, hopeless to understand the countermeasure, send an SOS to a relay station that "relays" information through the Net (like a far-future USENet). Our main characters, a humanoid, a swashbuckler from the ancient times, and two plant-aliens, travel to this slow unthinking planet to rescue the children and employ the countermeasure before the destruction of the Power engulfs the entire galaxy.


Whew. So if you're still with me, you can see that this is a big novel filled with big ideas - massive ideas, actually. Vinge himself is a mathematician and one of the world's best futurists. His concept of the technological singularity looms over this novel, so much that in order to properly tease out the science, one must understand the underlying theorem.


This space opera can be enjoyed without the long winded explanation that I gave. It's a gripping story that includes a really long chase, huge space battles, lots of destruction, and tons of well-imagined aliens.


Reading A Fire Upon the Deep, I was disappointed. Much of the narrative takes place on a medieval alien world, and many aliens get their chance in the spotlight. It was like I was being tricked into reading a fantasy novel, almost, but with many technological insights. Plus, Vinge's characters are paper-thin, and his prose doesn't really leap off the page.


But as I absorbed the novel, and really thought about how much cool science is in here, I began to appreciate the novel even more. There's so many fun little things scattered around that covers for Vinge's deficiencies as a character-builder. The amount of thought he put into the aliens is astonishing. Every little detail about the two main alien species are developed fully and with attention to realism. He even manages to avoid the Sapir-Whorf Hypothesis and have the aliens speak languages obviously invented by an author.


As a novel, A Fire Upon the Deep isn't the greatest. It's more a collection of really cool ideas thrown together. This isn't necessarily a negative thing. In terms of space opera, this is really good, but in the larger picture, I'm not about to include this book among the literary canon.


The novel's science is amazing, and the theory that it postulates about the technological singularity is fascinating and frightening. However, the prose is workman-like and the characters bland. A Fire Upon the Deep is an amazing curiosity shop of concepts rather than a solid novel, but still worth reading. I would recommend this to fans of hard and soft sci-fi as it bridges the gap quite well, containing excellent science and great action.
Posted by matthew. No comments: