For my birthday, my girlfriend got us weekend passes to the Central Canada Comic Convention held here in Winnipeg, Manitoba, Canada. This was her first Comic Con ever, and I was filled with excitement and anticipation. What kind of crazy costumes would we see? Who would be too large to fit into her Harley Quinn outfit? All these questions and more plagued me....

On Saturday, we marched from our apartment to the Convention Centre, and immediately, I saw a Klingon having a cigarette outside the building. Yes, it's going to be that kind of Con, huh?

With our weekend passes, we got a goodie bag filled with a free comic, some temporary tattoos, buttons, and coupons coupons coupons. Lots of 'em. The free comic my g/f got was a Jeph Loeb Red Hulk comic. I advised her to chuck it.

We wondered around and saw the Batmobile, the Ecto 1 that I saw at the last Con, and we got glimpses of Adam West and Julie Newmar (who looks like she's had "some work" done, if you know what I mean).

I met Marv Wolfman and asked him about the scriptwriting process for New Teen Titans. I met Joe Rubenstein and he almost yelled at me for commenting that Starlin draws small faces. He thought I said "weak faces".

When I went up to Rodney Ramos, I asked him why Darick Robertson's pencils on the Boys are so rough whereas his pencils on Transmetropolitan are cleaner. Ramos exclaimed loudly that its his doing and that Robertson hates when Ramos inks over his stuff. Robertson apparently likes the rough style and disapproves of the cleaner lines that Ramos gives. On top of that, for the Fury: Peacemaker miniseries with Ennis, Ramos had to redraw some Robertson figures because he couldn't be bothered with character models or face consistency. Ha!

I picked up the complete run of Tom Strong for 50 dollars even. As well as Sebastian O by Grant Morrison and finally, the last piece of the Ennis puzzle, I got The Punisher: The End, the only issue I didn't have of his. I also grabbed the 2 Disc Special Edition of Spielberg's Munich, an edition that is not available in Canada!

We also picked up some prints by Tommy Castillo who signed them, and my g/f picked up an autographed photo of Steppenwolf for her dad. All in all it was a good haul.

We also saw Klingon belly dancers. It was gross.

Here are some pictures to finish off the tale.... 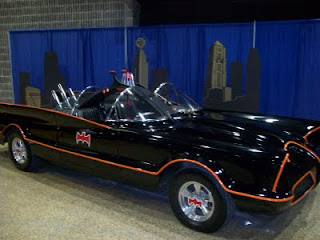 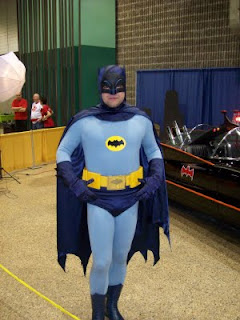 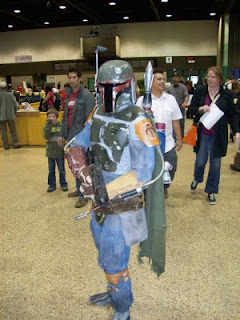 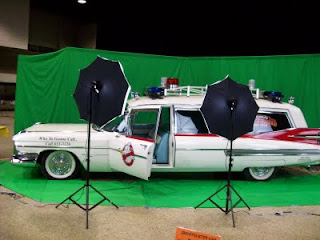 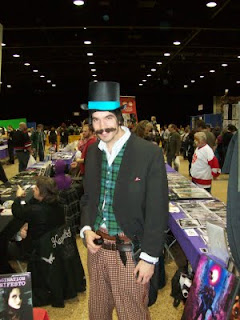 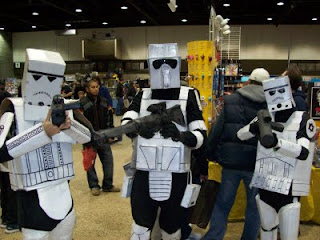 Email ThisBlogThis!Share to TwitterShare to FacebookShare to Pinterest
Labels: comics

Ponyo on the Cliff by the Sea 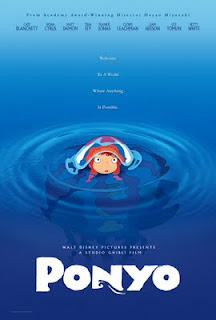 Hayao Miyazaki is a legend. From Princess Mononoke to Spirited Away to Nausicaa in the Valley of the Wind, the man is an absolute master of his medium. Animation is such a varied and vibrant medium, and Miyazaki makes his mark with style and warmth. My absolute favourite from Studio Ghibli is my first, which was Princess Mononoke, often considered his most environmental or adult film. After that comes the spectacular and heartbreaking Spirited Away. This year, Miyazaki came out of retirement to bring us Ponyo on the Cliff by the Sea, and I finally got a chance to see it.

Before we go any further, a note on which version I happened to see. Normally, I prefer subtitles with my films of a different language, never dubs, but Miyazaki films often get produced with the finest translations and casts possible. In North America, the odds were that I was going to see a dubbed version. However, I got lucky, and was treated to an original version with official subtitles.

Ponyo is a goldfish who dreams of being a human. After meeting Sosuke, a five year old boy living on a cliff with his mother and mostly absent sailor father, Ponyo desires freedom from her father, Fujimoto, who keeps her in an aquarium at the bottom of the sea. Thanks to a drop of Sosuke's blood, Ponyo is able to temporarily transform into a human. Ponyo and Sosuke fall in love, or at the least the children's version of love, and embark on an adventure through the flooded town in which Sosuke lives, all the while evading Fujimoto and his magic.

It's an extremely simple story and the observant viewer will notice the archetype of Han Christian Anderson's Little Mermaid story. But Miyazaki isn't content to retell a story of a goldfish who wishes to turn into a human. Miyazaki stamps this film with his pet themes of environmentalism, strong heroines, and the oft-beguiling nature of a child. Throw in some gorgeous magic all hand drawn like the rest of the film, and you have an absolute visual treat.

However, this is not Miyazaki's best film to date. While the first half of the film is engaging, the second half sags a bit. In the beginning the humour and wonder of a goldfish turning into a girl propels the film forward, as does the well drawn (figuratively and literally) characters. But once the sea has exploded and flooded the town, and Ponyo and Sosuke travel by boat, the pacing slows down to a crawl.

When the film meanders to its conclusion, it feels rushed. There's a great chase scene that happens, but it only happens for about two minutes. The adult characters stand around and talk, but only some of it is revealing. Mostly the machinations of Fujimoto, the antagonist, remains enigmatic and elusive, almost as if since the main characters are children, and wouldn't understand the adult world, neither should the audience. It's not necessarily a bad thing, but it is strange.

Those two complaints are not ruining. The film is still utterly beautiful and wondrous, like a child's dream. The animation is beyond reproach, and should (but won't) signal a return to 2D animation. Hopefully Disney's paean to their glory days, The Princess and the Frog, will boost the traditional animation's profile. 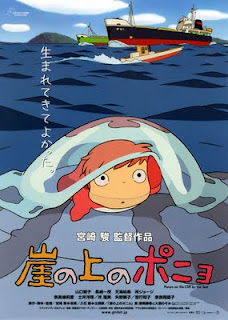 Ponyo on the Cliff by the Sea isn't perfect, but it's extremely close. A little tighter in the pacing, and a bit more exposition, and we'd have a masterpiece on our hands. This is a amazing and wonderful movie for children and adults, and a terrific throwback to when animation wasn't done on computers. I highly recommend this!


Posted by matthew. No comments: