In my head, I have this long list of out of print books that I always look for when I'm at a used bookstore. Most of them are obscure sci-fi and horror novels that have slipped out of the public consciousness, but have serious fans out there. The holy grail was Tom Tryon's The Other, which blew me away, considering my expectations. Another is Robert Marasco's Burnt Offerings, which by chance I found for one dollars at a stupid bookstore called Globo-sapiens. But this is about the book and not the store. 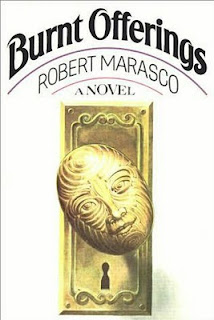 Ben, Marian, and their son David don't want to be stuck in their cramped Queens apartment all summer, so they rent a giant dilapidated mansion out in the country from a bizarre brother and sister, with the only caveat being their elderly mother never leaves the house. Marian absolutely throws herself into fixing up the house and taking meals up to the reclusive elderly woman, while Ben is slowly having a nervous breakdown thanks to a lack of sleep and frequent blackouts. As Ben tries to figure out what's happening in this house, Marian loses her grip on her family for a house that needs her.

On the cover of my copy of Burnt Offerings, a newspaper quote claims that this novel is better than The Exorcist, The Other and Rosemary's Baby, all three of which I would classify as being masterpieces. Does this book rise to that level? Short answer: yes - long answer: no.

It's extremely difficult to review horror, I find. Unlike any other genre, horror's quality relies on the effectiveness of its visceral reactions. For a horror book to be good is has to be: well plotted, well characterized and scary. Most books can only manage the first two. Something always messes up the last thing.

Part of the difficulty is that books are rarely as immersive as a film. You don't let go like in a movie. With a book, you're always sitting on the couch, you always need light to read, and there's probably background noise. Now to compound this problem, you have a book that's 30 years old, and its tricks have been repeated and re-used a thousand times, diluting the scares.

But Burnt Offerings struggles valiantly against this obstacle. I was almost always fully invested in the sequence, willing to be scared, and the best the book can do is creep me out. I think that's a big thing, even if it seems minute and ineffective. I'm jaded to horror, and this book manage to creep me out.

It helps that Marasco plots the novel with an expert hand. The scary bits are relentless in their approach, and are structured very well. Marasco also stacks the novel with some amazing subtle motifs that build throughout the novel, but without ever hitting the reader over the head. The meaning of the title becomes apparent about halfway through the novel, but is never spelled out to the audience. Never! It's always just implied.

I was wise to Burnt Offering's tricks, but I was still given the heebie-jeebies. If that doesn't speak to the impressive skill of the novelist I don't know what will.

But I said that the long answer is no, this isn't as good as the other books. Well, unfortunately, it just isn't. Marasco builds his novel with a great foundation, vivid characterization, unique dialogue, but the stakes are small potatoes, and that's what stops Burnt Offerings from rising to the pantheon.

The problem is that Marasco isn't willing to go balls-out until the last 5 pages, letting the scares subtly build up for the duration of the novel. A better example of how to scare the pants off the reader is Jay Anton's original Amityville Horror. There's a book that is hard as fuck, even at the halfway point. But Anton's novel suffers from being poorly written and populated by badly designed characters (I refuse to entertain the book's status as non-fiction - bullshit is what it is, albeit entertaining).

Other than this substantial but not fatal problem, Burnt Offerings is a great read. It's a well-crafted haunted house novel with a unique angle, one I've never seen before. Modern horror writers could definitely learn something from him, how he slowly builds a horror surface while simultaneously crafting an eerie poetic subtext that collides in the last couple pages with great results. I really liked this book, and would kill to see it get more love in the public.
Posted by matthew.