The Eighties had the sweetest action movies. Big guns, big dudes, big explosions, and super evil villain. Since Sylvester Stallone is riding the nostalgia-train with Rocky and Rambo, he may as well make a whole new throwback. To do so, he amassed a who's who of action stars, past and present and made The Expendables. But is it any good? 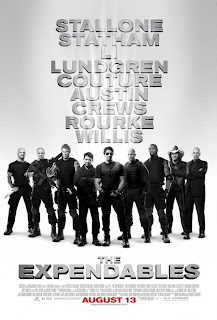 Stallone and his group are mercenaries for hire, and their newest job is getting rid of some rogue CIA agent who has set himself up behind a dictator of a Latin country. Stallone falls in love with the dictator's rebellious daughter. One of their own betrays them. They get into fights. Stallone gets a tattoo. Jason Statham throws a knife at a dartboard from outside the room. He stabs a basketball. There's lots of explosions.

The plot is pure drivel. The acting is atrocious. The romance is gag-inducing. But the action? The action is fucking sweet. The fist fights and the gun-play are top notch. This is a tried and true action movie with all guts and all glory.

One doesn't watch this movie without keeping all of this in mind. One just simply enjoys. There's no point in analyzing subtext, or metaphors or imagery. As long as the movie never bores and stupefies the viewer with non-stop violence, then it's a success.

However, there is a point I'd like to raise. If, indeed, these mercenaries are so goddamn good, why, then, are they getting into fist fights with people? If they were that good, they wouldn't ever be seen. They would have just killed you before you had a chance to put up your dukes. I find it illogical that Steve Austin's character, the CIA agent's henchman, and Stallone would have a bloody, epic, bone-crunching brawl. Wouldn't Stallone have pulled out his emergency handgun and blown a hole in Austin's face? I think so. When do soldiers ever engage in fisticuffs?

Whatever. The Expendables was an entertaining movie that had some great fight scenes, lots of explosions, a pointless story, and some fun cameos. It was obvious that the cast and crew enjoyed themselves while making the movie, and that in turn made me enjoy the film more.
Posted by matthew.