Hard Case Crime has been publishing new and classic noir books for awhile. I've read a couple, from before this blog's lifetime, and I decided to give another a try. I went with Lawrence Block's Grifter's Game, originally titled Mona. 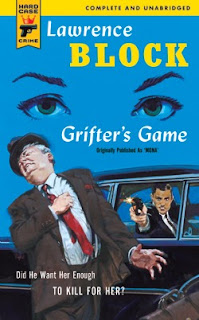 Joe is a smalltime con artist, conning lonely women out of their hard-earned cash with his good looks and charm. But one day he steals some luggage, finds a million dollars worth of luggage and meets Mona, the luggage owner's wife. They hatch a plan to relieve the husband of his money and his life. Will Joe be able to pull it off?

This is a very light and quick read, with some good hardboiled prose, mixed with some bad prose. The con going on is fairly easy to pick up on, but it's the amazing denouement that elevates this book from dime store trash to great work of hardboiled.

So Joe and Mona scheme to murder Keith, the husband, and make off with his money together. Joe kills him, and then Mona disappears. Obviously Mona planned all this and has now scuttled off with the money. Joe traces her down, and ties her up, and - wait for it - turns her into a heroin addict!

Awesome. Of all the lowdown, inhuman things a person to do to another, that's one of them. To add insult to injury, he forces her to marry him, and then they live together, with Mona being constantly under his thumb.

It's evil. It's misogynist. It's awful. It's pure noir.

There's really not a ton to talk about when it comes to this book. It does everything it says it's going to do, and it does it well.

Other than the ending, there's not much to recommend with Grifter's Game. It's a quick read with quite a bit of sex and a bit of violence. The plot is well wound, but unfortunately predictable. I'd only suggest this for fans of hardboiled.
Posted by matthew.