I had trouble starting A Rage to Live, so I thought I'd take a quick detour on O'Hara and sample one of his California/Hollywood stories, namely the novella Hope of Heaven. 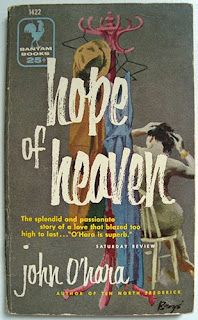 Molloy is a moderately successful screenwriter and he gets a call one day from a man from his hometown who's deep in trouble over cheque forging. Molloy helps him by just being the guy who the forger confesses to. At the same time, Molloy has been seeing Peggy, and trouble ensues when Peggy's estranged father suddenly appears, and Molloy figures there's some connection between the forger and the father.

I guess this is as close to a detective story O'Hara would ever write, and it's pretty good. But it's not great. The atmosphere, and the angle of approach to the story, which I've never really encountered before, is admirable. Even if this is a Chandler homage or reference, it's too original to smack as one.

However, this isn't a detective story. This is a classic O'Hara study of society and the people living in it. The mystery at the heart is simplistic and merely a MacGuffin for O'Hara's long conversations and observations on polite society. The overall effect of this is of improvisation. I spoke of this before with O'Hara, and this work is strongest of all for that argument. It feels like O'Hara has no idea where the story is taking him, but he layers the foreshadowing and the Catholic imagery on nonetheless.

The outcome is a fizzle of an ending. It's not awful, but it's not good either. If O'Hara was doing a Chandler, he should have learned how to plot more fully than this. This is a sketch, rather than a tight plot. There's a fantastic, atmospheric, prescient and cutting 1930's detective story somewhere in this novella. I would love a chance at adapting this for the screen and tightening the plot. That's not to be, however, and all we are left is Hope of Heaven, not what could have been.

On the whole, I enjoyed Hope of Heaven. It was a breezy read with great atmosphere and compelling characters. With a stronger ending and a tighter focus, this could have been a masterpiece to sit beside Hammett and Chandler. (Honestly, this makes me want to read more 1930s detective fiction, which I can never get enough of. I've read everything by Chandler and two biographies of the man!)
Posted by matthew.