I am a fan of Kazuo Ishiguro. I really really really liked his two most famous novels, but I was defeated by a couple of his lesser known works. So it was with a little trepidation that I approached his most recent release, Nocturnes, a collection of five short stories. 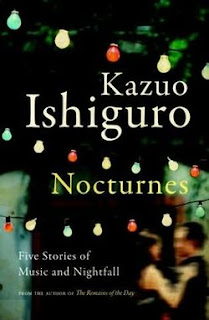 In this collection, Ishiguro takes us through the connection between music and romance, showing us people such as an old crooner, a saxophonist recovering from plastic surgery, a cellist, and others.

These stories are good, entertaining, but forgettable. Overall, I felt the stories were slight and fluffy. Plus, the thematic arc of music has tenuous and sparse connections at best. Certainly the second story has almost nothing to do with music, and feels like it was added to the collection as an afterthought. It's a story of physical comedy and classic British sitcom style humour. While that's fun, it's not really substantial or meaty.

I was entertained for the duration of the book. Ishiguro's prose is good, clear, and his use of the first person narration is always excellent. But never in Nocturnes does his prose ever rise above good. Most of the time it's workmanlike and descriptive, but never powerful.

Nocturnes is a good collection of short stories, but nothing particularly memorable or striking. This is a work for previous fans only. All five of these stories will only make the reader hunger for more substantial Ishiguro work, and hopefully he will publish something sooner than later.
Posted by matthew.