There's not a lot of horror movies that can actually scare seasoned veterans such as my girlfriend and I. One film that managed to do so was the lo-fi sleeper hit Paranormal Activity. I'm pretty sure it's my g/f's favourite horror film of all time. She's made me watch it 6 times - I'm thoroughly desensitized to it now. But, we had a small measure of hope that the cash-in sequel would deliver the same level of fear without stooping to Blair Witch 2 paroxysms of tedium. She insisted we see the opening show on Thursday, and we did. 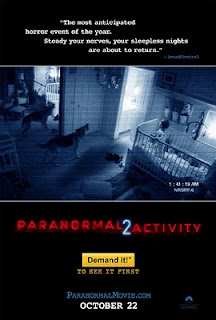 While it's advertised as a sequel, Paranormal Activity 2 is more of a prequel and a sequel that runs concurrently with the original. We're introduced to a family welcoming a new baby from the hospital. We're introduced to Dad, Mom, teen Daughter and the Dog. We find out that this new mom is actually the sister of Katie, from the first film. Suddenly, bad things go bump in the night and they're focused on the baby. Things take a turn for the worse, and the mythology of the first film is deepened by idiotic exposition delivered in wooden fashion.

I give a glib synopsis, but I still loved this movie. On the spectrum of horror sequels, this is on the fantastic end in terms of quality. The scares in this movie are just like in the previous one, but different, or louder, or more frequent. It's unbearably tense in certain scenes.

Or at least, I think they would be. The unfortunate thing about seeing this movie on opening night was that everybody else wanted to see it on opening night. I have never, I repeat never, heard so many people talking during a movie. Without exaggerating, I can say there was not a single moment during the film when the entire audience was silent. Everybody was whispering, or shouting or screaming, or yelling juvenile jokes at the screen. Yes, there were people there who thought their comments were so entertaining that they felt they had to share it with everybody. The entire experience was ruined for my girlfriend, who was unbelievably excited for this. So thanks to you, homies who attended the 9:35 pm show of Paranormal Activity 2 on Thursday October 21st, at the Silver City Polo Park theatre.

But whatever, the movie was still scary, despite the never-ending audience noise. That must be proof positive of successful horror tactics. However, not everything was perfect. The ending of the film leaves much to be desired. It uses one of the endings, and attempts to deepen and complicate a story that was decent enough on its own. The ending is also not scary in the slightest. It's just weird.

Paranormal Activity 2 was a surprisingly entertaining 90 minutes. It was nothing new, and all of its tricks are tried and true, but somehow it was frustratingly successful in scaring the crap out of me. There's one particular scene in a kitchen that sort of kind of references a kitchen scene in Poltergeist, but it's so well done that I would rank PA2's kitchen scene as one of the scariest ever. Overall the movie is a good solid horror movie. I just hope they don't keep making sequels. (They made a million Saw movies, so I wouldn't be surprised)
Posted by matthew.