Readers will remember that I really liked Gay's first novel, The Long Home, and I decided to keep going, his next novel being Provinces of Night. 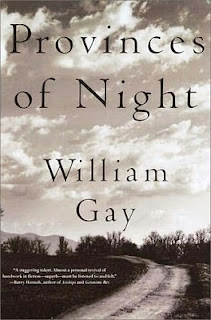 When his father, Boyd, decides to travel north, to hunt down his adulterous wife, Fleming is left alone in the house, in 1940s Tennessee. Meanwhile, his grandfather, E. F. has decided to end his exile and come back to the homestead. This novel follows the three generations as they learn about vengeance, love, family, and everything that makes them Southern.

The title of this book comes from a Cormac McCarthy novel, which states the intent right there on the cover. This is a Southern gothic novel, but without the crazed violence of McCarthy or The Long Home. Unfortunately, Gay pays further tribute to McCarthy by doing without quotation marks around dialogue. This isn't necessarily a bad thing, but its self-conscious emulation is somewhat distracting.

My previous problem with Gay was that he had no faith in the reader when it came to his protagonist. I can happily state that this problem is rectified. Gay's strong character construction shines through, and he doesn't hold the reader's hand through any thoughts or motives of the cast. He simply lets them speak for themselves either consciously or unconsciously. It's a tremendous improvement.

However, Gay's plotting takes a serious turn for the worse. This is a novel made up of slight character sketches, mostly enjoyable, some humorous, some heartbreaking, but the thrust of the main plot is meandering and weak. When we've reached the end of the novel, things are resolved, but not in any meaningful or dramatic way. The characters just keep going. Again, this isn't necessarily a bad thing, but the weakness of the plot structure was amateurish.

Something that Gay builds upon, from his last novel, is the mystery surrounding magic. One of the cast in this novel claims that he is able to cast spells and put curses on people, and Gay keeps the efficiency of these hexes sort of ambiguous. It's a nice change from the grim and gritty style of fiction these days. Perhaps there's more to the world than meets the eye, Gay supposes subtly.

I still really enjoyed Provinces of Night, even if at times I felt it was McCarthy-lite. Gay's storytelling skills (not novelist skills) are strong as before, and he lets his characters do the bulk of the narrative work, rather than an intrusive narrator. When Gay lets loose his characters in a tighter plot, then we might have the makings of a great novel instead of a good novel.

While Google searching an image for this post, I found out that there is a film based on this novel! Can you believe it? It's called Provinces of Night, obviously, but it also goes by Bloodworth, which is the last name of the family in the book. The movie stars Kris Kristofferson (who is a great actor) and Val Kilmer. I'll try to see it!

Next up is Twilight by William Gay and The Little Stranger by Sarah Waters, which I've heard good things about. I still have Nabokov's Pnin somewhere, so I'll give that a go.
Posted by matthew.