Did you know that the second run movie theater on McGillivray charges only $1.50 on Tuesdays? That's crazy. I'll see, like, any movie for $1.50. Why not? With this attitude in mind, the girlfriend and I went and saw Salt last night. I have some really quick thoughts on it, considering the amount of money I spent on seeing it. Spoilers follow. 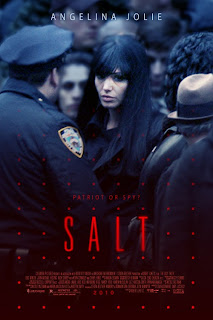 Salt has an extremely solid premise, but does not deliver on the questions of identity teased by the advertising campaign. Once we had reached the halfway point of the film, the audience has no questions relating to Salt's identity. It's irritating.

Also, the whole "paralyzing venom" subplot is so annoying and unscientific that the girlfriend and I were making fun of it during the entire movie. I called it so quickly, and was disappointed so thoroughly by the end of the movie that I can surely say I hated Salt because of the subplot.

Other than this frustrating aspect, the plot holes in this movie are big enough to fix Texas through. Most of Salt's action relies heavily on coincidence. She's always in the right spot at the right time. Like when she's on foot and stuck in traffic on a freeway, the CIA are about to squish her with their generic black SUV, and of course, a motorcycle just happens to swing by. Ugh.

While the action may be dependent on coincidences, most of it seems to be done without the use of CGI. The freeway chase scene looks like all stuntwork and practical effects. That's rare, and very commendable.

You could have put ANY actor in Jolie's place and they would have done just as good if not better. Angelina Jolie is one of the most overrated people on the entire planet. I don't just mean acting skills. I mean as a person. Those giant gross lips are a big turnoff too.

Anyways, long story short, Salt sucks, but it entertained me for 1.5 hours for 1.5 dollars.
Posted by matthew.