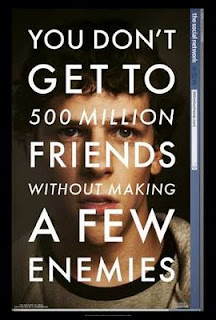 Mark Zuckerberg is a programmer gifted with the knowledge of the here and now. He sees the need for a website where people can see pictures of their friends, and it all ties to exclusivity. His friend Eduardo Saverin puts up the money to host this site. Soon enough, TheFaceBook takes off, catching the notice of Sean Parker, co-founder of Napster. Eventually, Facebook is making enough money to support itself, and Parker and Zuckerberg scheme to remove Saverin from the company.

From the very first virtuoso scene, we know this is a movie about dialogue, written by Sorkin. It comes rapidly, overlapping, at a breakneck pace. It's absolutely fantastic. Fincher's visuals are strong and confidant, just like usual, but his work is overshadowed by the screenplay.

The actors are especially strong as well. Jesse Eisenberg has the difficulty of playing a character introverted and anti-social, but without alienating the audience. It's a tricky part. Justin Timberlake is good as Sean Parker, but I wasn't blown away by him like some critics were.

One of the surprises was actor Armie Hammer, who has dual roles as twins Tyler and Cameron Winklevoss. The twins are the most captivating, entertaining antagonists I've seen in a long time. It helps that they have the best lines in the whole movie. There's a scene in which they complain straight to the President of Harvard, something they used their daddy's contacts to do, and they get reprimanded. The dialogue is ridiculous, and the twins hold their own.

I'm not sure if the movie goes ahead and makes any epic statement about the prevalence of Facebook. The scope by which they took over the Internet doesn't get the focus that the lawsuits get. This is more of a movie about the path to success, and the people who will do anything to achieve it. And that's not a bad thing. I just don't think that, in the future, we'll be analyzing this film for its prescient themes on technology.

The Social Network is a great movie, ably directed by Fincher, and expertly written by Sorkin. The cast is great, and the movie is always entertaining and never boring. While I don't think it's the deepest film in the world, but it is still a great movie.
Posted by matthew.