I went through a big Elmore Leonard phase when I was in high school. It was due to discovering Tarantino and his adaptation of Rum Punch. So I devoured a whole bevy of Leonard novels, and quickly got sick of them. I found them repetitive and plotless. I decided to give Leonard another try, and I'm glad I did. It seems that when I was younger, I missed the point. 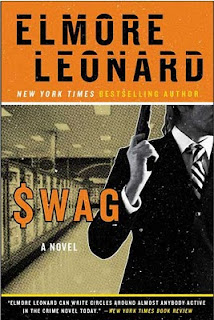 In Swag, Ernest Stickley Jr, aka Stick, gets busted by a car salesman while stealing a car. But the salesman, Frank, has plans. He makes up a set of rules to follow, and he and Stick embark on a campaign of well-planned armed robberies. Of course, the money gets too easy, and the rules go out the window for one big score.

As I said, I must have missed the point entirely, or this is the best novel Leonard has ever written. Either way, I had a fantastic time reading this book. Leonard's prose is so effortless and so cool. His dialogue leaps off the page. The only thing that gives away this book's 30 year old age is the lack of cellphones. Otherwise, I would have believed this had been written yesterday. That's how strong this is.

Reading all these noir and crime novels the past week has made me wonder why this is the genre I always come back to, the genre I always tend to write when I do. I'm sure there are better critics to tackle this subject, but I think part of what makes noir so attractive is the idea of a world just below the surface of our own, recognizable, but not always following the same rules ours does. Noir characters are always trying to avoid our world, our 9 to 5, our credit cards, our SUVs, our reality shows and our boring meaningless lives. The people in this underworld can't make it with the overworld's rules. They struggle and end up sinking back. What makes this so attractive to us is our constant and insatiable desire to sink down too, but what stops us is the stability of our lives. So we watch them, we watch the underworld move up against us and slip back.

With Leonard, we're watching Stick and Frank do what we want to do. We want to rob banks and have a 24-7 party, pick whatever fast car we want and just take it. Instead of hard work and sacrifice, Stick and Frank just take what they want. It's the sublimation of the id.

But of course, what goes up, must come down, and we revel in the fall. We ache for the pendulum to swing, because if we can't have it, why should they?

This doesn't really relate to Swag specifically, but it certainly sticks to most of Leonard's output that I've read. I absolutely love noir and crime because I want the shadows. I want the darkness. I want the freedom. But I can't have it. So I live through Stick and Frank and it was a great time.

I absolutely adored Swag. I had a fantastic time from beginning to end. Even the ending was really good, something Leonard often has trouble with. Swag is a masterclass in unbelievably good tough guy dialogue, and he always keeps it real and in the moment, as opposed to Chandler and Delillo's often detached dialogue. I had such a good time that I'm going to read some more Leonard, but this time I won't make myself sick of him and wait another 8 years before trying again.
Posted by matthew.