I've always been more of a Chandler fan than a Hammett fan. I've read The Maltese Falcon and liked it, but I always had a bit more love for Marlowe's nihilism than Spade's opportunism. That being said, I have never read The Thin Man, that is, until now. 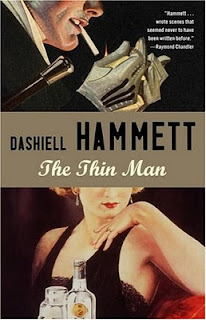 Nick and Nora Charles are on vacation in New York when the daughter of an old client introduces herself. It seems her father, the thin man, hasn't been in contact for years, and that Nick should get in touch with the family lawyer. The next day, the thin man's lover is found murdered and suddenly everybody has an angle. Nick keeps professes to have been retired from the sleuthing game, but it doesn't stop him from trying to figure this out, before more bodies turn up.

Oh boy. I was hoping for a complicated mystery, and I certainly got it. This is as convoluted as they come, but it's never baffling for the reader, and certainly not for Nick, the dapper hilarious hard-drinking detective. The solution to the mystery is one that I did not see coming, and everything sort of fit.

I guess I'm always going to be a Chandler fan, because I liked The Thin Man, but I didn't love it, and I think I know why. Historically speaking, Hammett refined the genre, giving it most of its hallmarks, but Chandler stylized it, giving it the nihilism and the deeper themes. The Thin Man is lacking in style. Oh, sure, it has style, and it's a better written hardboiled book than most people could ever dream of, but it just doesn't have the edge that Chandler gave hardboiled.

This might be a little too harsh on The Thin Man. After all, it's not Hammett's fault that The Big Sleep is just better. The Thin Man remains a well-crafted mystery, with well-drawn focal characters, and it has enough sex and violence to keep me interested.

The sensation I got from this book is Hammett's sheer professionalism. This is a theme that I return to time and again with this blog, because I'm really fascinated by economy of prose and structure. Hammett had an clear understanding of the ending when he began devising the mystery, and probably just added to it as needed. But what's most impressive is how each element is revealed and the pace by which it happens. It's a transcendent skill and it's pulled off with punch.

I kind of had problems with the long drawn out explanation at the end, when Nick elucidates the solution to Nora. I'm not in favour of this. Marlowe only ever explained enough of the solution for the reader to go back and piece it all together themselves. But this is where Hammett reaches for the fatalism and nihilism of the genre. Both Nick and Nora agree that the ending of murder mystery only changes the murdered and the murderer, and that nothing can ever fit perfectly together. Nothing will ever tie it up in a neat little bow - there's always loose ends and lives to live afterwards. It's a beautiful final page and extremely influential, if you look at popular authors such as Pelecanos, Lehane, and Price.

Overall, I really liked The Thin Man, but I didn't love it. This novel is extremely well crafted and the dialogue zips along, carrying the reader further and further down a rabbit hole. I will definitely read more Hammett and fill in the holes in my noir reading, after so many years of being exclusively a Chandler fan.


I will admit that I'm going to be reading some noir and hardboiled stuff for awhile until I get sick of it. I have Lawrence Block's Grifter's Game on my shelf along with some lesser known James M. Cain books. I've read all his famous ones and adored them. I'm also going to try some of the Chandler-followers such as Ross MacDonald and Robert B Parker eventually. Wish me luck!
Posted by matthew.