Since I enjoyed William Gay’s previous novels, I thought I might as well continue and read his third, called Twilight. It’s very rare that I read all of a particular author’s work, but Gay has a few things in his favour: his books are mercifully short, well-written, and easily available from my local library. With this in mind, let’s take a look at Twilight. 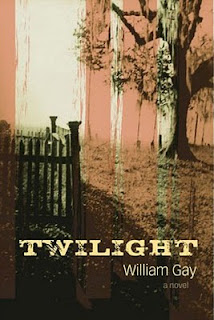 Kenneth and Corrie Taylor, siblings, suspect that the undertaker would buried their father is up to no good. When they stumble upon incriminating evidence, Corrie decides to extort the perverse undertaker. Unfortunately, the undertaker employs a vicious inhuman ex-con to retrieve his property and silence the siblings forever.

Now this is Southern Gothic at its finest. Everything that I had problems with regarding Gay’s fiction is almost entirely fixed. Here is a tight, suspenseful novel with well-drawn characters, underscored by Gay’s increasingly strong prose.

As aforementioned, this is a tight novel. Gay spends the first half setting up characters, situations, the plot, and then the entire second half is an extended chase sequence through a surrealistic backwoods rural area. Gay uses gorgeous language to convey the land’s inherent beauty and danger. During the chase, young Kenneth meets a variety of country folk, some helpful and some dangerous.

Gay continues his theme of mysticism of the South with this novel. At one point in the chase, Taylor comes across a witch, who purports to have potions and spells. And once again, Gay leaves it ambiguous on whether or not the witch has any real power.

Instead of relying on short sketches to propel the characters through the motions, Gay wisely lets the plot itself do the work. A botched blackmail job and the spectre of Death hunts them. It’s fantastically simple, and Gay absolutely pulls it off. Twilight is the culmination of the two previous novels.

Twilight is a wonderful novel. It is chock full of great dialogue, well drawn characters, all put through a tight plot and tons of great symbolism. William Gay has written a suspenseful, beautiful novel that can stand up to McCarthy’s early work as well as great modern Southern fiction.

And so ends the William Gay streak, as my library has no other book available by him. A quick Google search lets me know that his fourth novel is scarce, but will no doubt get a wider printing due to the movie based on his second book coming out this year.
Posted by matthew.