I heard Ross Macdonald was always a Chandler clone, and that I should avoid him. I decided to give him a try regardless. I went with a cheap paperback I found at the aforementioned shitty bookstore and read it in one sitting. 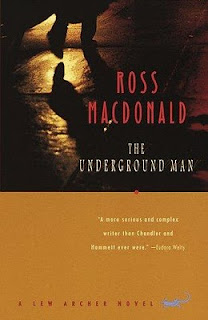 Lew Archer, Macdonald's Marlowe, gets involved in a weird kidnapping, all involving a small community high in the hills of California during an oppressive and unstoppable forest fire.

Starting with the negative aspects, let's talk about the style. I was told Macdonald was a Chandler clone. If that's the case, where in the world did the attitude and style go? Macdonald's prose is often as lifeless as it is lyrical. When Archer is gazing at the fire, and resigning himself to another awful interview, Macdonald shows us he can write careful prose. But a lot of the time, the muscular tough guy prose, a hallmark of the genre, is absent, replaced with simple flat descriptions. Like Hammett at his worst.

The single most problematic aspect of this novel, next to the absence of style, is Macdonald's sheer confusion of imagery and motifs. The only significant image in the book is the forest fire and he rarely does anything with it. It's just atmosphere. Fire means passion and it means consuming and it means renewal. None of these archetypal meanings apply to The Underground Man. Instead of using the fire, Macdonald uses the title and the theme of what lies beneath the surface, buried but never forgotten. The confusion is that Macdonald doesn't bring out that heavy gun until the climax. That's not to say that the forest fire wasn't terrible. It gave the novel some much needed atmosphere, which worked.

There are positive things to say about The Underground Man. The best thing I can say about it is the amazing use of the main character's depression and grief and loneliness. This is Chandler's posited concepts of the detective absolutely refined. Lew Archer is an intensely moral man. He's sort of like a detective version of McCarthy's John Grady Cole. Archer's whole outlook is wrapped around his sense of morality, and his outrage at the awful things people do to each other. Chandler claimed that the detective is the direct opposite of amoral. The protagonist should always have a strong moral centre, and Archer is the embodiment of that sentiment. This is what works best in the novel.

What struck me about Archer is the same as what struck me about Lehane's Patrick Kenzie. With Lehane's series, you read them in order because what happens to Kenzie, the toll that the crimes take on him. The depression, the exhaustion, but never the compromise. That's what made Gone, Baby, Gone a classic. It's the same with Archer. I'm fascinated by a guy who never stops believing in what's right and wrong, but hasn't the strength to remove himself from the underworld.

Macdonald also plots the hell out of this book. The mystery is over complicated and relies very heavily on the shared community, but it's never detracting or irritating. The central reveal is dependent on coincidence and Archer's guess is pretty out there, but it never bothered me. I went into this hoping to be made dizzy by the plot, and I wasn't disappointed.

I just don't think Macdonald does anything profound or transcendent with The Underground Man. I don't think he's doing anything amazing with this book. But, because I was impressed by Archer and impressed by Macdonald's vision of California, I'm going to read another one and hope for the best. Wish me luck!
Posted by matthew.