I have been waiting to read this book for months. I'm not 100 percent sure why I was so excited to read Union Atlantic, but maybe it was because I had an inkling it would be sort of like Gaddis' JR or something: about the financial system and how dehumanizing it is. Well, I finally got my chance to read it. 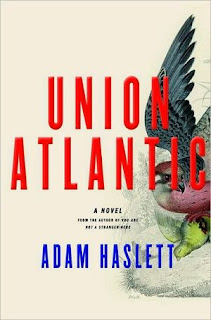 Doug Fanning is a successful investment banker who has decided to build a giant eyesore of a mansion in his old hometown. The land he has chosen is adjacent to Charlotte Graves' home, and the land itself was bequeathed to the town by Charlotte's grandfather. Charlotte, a history teacher forcibly retired for outspoken politics, decides to take legal action against the town and Doug, as she sees it still as her grandfather's charitable donation. Meanwhile, one of Charlotte's tutors, teenaged Nate has fallen in love with Doug, and Charlotte's dogs are speaking to her with the voices of Malcolm X and Cotton Mather. To complicate things, one of Doug's underlings has taken billions of dollars and illegally moved them into a stock that was sure to succeed, but is now failing in light of the 9/11 attacks.

Even though Union Atlantic is only 300 pages, it does seem like a big novel, weighty and full of serious things about the state of the union. And, it does seem to say something about the financial world post-9/11, but I'm not sure if Haslett does anything deeper than just saying something, superficially skimming the surface.

First of all, the novel seems rushed. Everything happens so quickly, there's very little time for the characters to breathe. The only time the novel relaxes is when the focal character of the chapter reminisces and we're treated to a flashback. These memories are the absolute best parts of the novel. Because of this rushed feeling, countered against the fantastic flashbacks, the novel feels like a first draft, like a practice run to a better, longer and more comfortable novel. There's a masterpiece to be teased out from this sparse structure.

Haslett's prose is never stilted or boring, and he has a tendency to - most of the time - let his characters' actions speak for themselves, rather than any intrusive narrator explications, a page from the minimalist book, I suppose. But since the novel is so intent on getting to the end, his prose never gets a chance to shine. We're just whisked off from one flashback and one movement across the chessboard of the plot to another.

It's rough to do this, but I was often comparing this to Franzen. In Freedom, Franzen takes his time to paint a portrait of a country (and the world) in crisis, and never shirks away from the big picture. Haslett seems to be doing a variation on this. He wants to have the big ideas without the didacticism and with the more intimate character studies. He sort of succeeds in this, but the big picture is missed by the reader when the best bits of the books are Haslett's character-building.

The best subplot of the novel is the unhealthy relationship between the underaged Nate and the dominating Doug. Until this, Doug had always been exclusively a heterosexual, the novel pains to belabor, and is really really ridiculously good looking. He uses Nate to steal documents from Charlotte in aid of his defense of her lawsuit. This really does reinforce the dehumanizing aspect of having so much money, and so much power, as Doug treats Nate like a pile of shit. But there is an amazing, extremely deft and masterful end to this subplot, which I won't spoil, but it's there on the penultimate page and it's utterly heart-wrenching.

There are some bravura sequences, such as the house party that some rich wife of a Federal Reserve head gives, which is hilarious, sad, important, and sage all at the same time. The husband hires some two-bit security force, and everybody's nervous, considering this is less than a year after 9/11, and some hippie calls someone a terrorist, and then chaos reigns. It's a great scene.

I can't say that I loved Union Atlantic. I was left underwhelmed by the rapid pace and the lack of enthusiasm for its subjects. I was impressed by the character-building, and Haslett's ability to lift the cast from the dismal machinations of the plot. As I said, this feels like a first draft, and could use some breathing space, to get across the scale of the financial world, without sacrificing the great character bits. Still, the novel isn't terrible; it is often good and sometimes great. I had high hopes, and they were mostly dashed. Oh well. I'll always have Gaddis and Franzen.


So, here's an update on what I've been doing. I'm over halfway through Justin Cronin's The Passage, which is on everybody's list now, and I have to say that so far, the novel is exceedingly overwritten and needs a trim. The opening of the novel is wonderfully epic and masterful, but when it shifts gears and moves ahead 100 years, the novel becomes - and I hate to use the term - terrible. I'm also about to start O'Hara's A Rage to Live, which should be good.
Posted by matthew.