At End of Day

I'd never heard of George V. Higgins before, but I'm glad I did. Apparently his most famous work is Friends of Eddie Coyle, also made into a movie with Robert Mitchum. I went with Higgins' last published work before his death, called At End of Day. 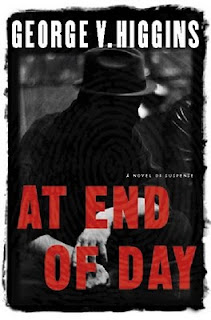 Nick and McKeach are Boston's best criminals. They've been doing it for decades and the local police and FBI have nothing on them. The reason why they're so clean is because they're a) really good at their jobs, b) not the La Costa Nostra, and c) they've been supplying info to the Feds for years. But some local cops have accidentally stumbled onto evidence that implicates them, and things might finally change.

I can honestly say I've never read a novel quite like this. At End of Day is made up mostly of conversations, monologues and speeches, with most of the action being in the past. The big scenes in the novel occur just after a big dinner the main characters are having, and it's a thirty page conversation.

The dialogue everybody has is full of long meanderings into the past, lots of tangential anecdotes, and a ton of funny lines. This is a novel weaved from what people are saying, rather than doing.

Luckily, Higgins' mimicry is excellent, but not masterful. Everybody honestly sounds the same. This could be because they're all from the same Boston neighbourhood, or it could be that Higgins isn't William Gaddis. This is a really slight criticism, however, because even if everybody sounds the same, they're all equally entertaining.

And they're all talking about the same subject: the symbiotic relationship between the cop and criminal. The order and the chaos, and how similar they truly are. I've never read a book that so intimately explored how they need each other. Sure, there's been some books that talk about it, but none of them truly mined that territory in such idiosyncratic and unique fashion.

The crucial moment in the novel is when a high ranking Fed needs a loan, and his underling suggests Nick and McKeach for the supplier. It turns out the two criminals have been lending out interest-free money to the local top dogs for years. It's a careful system that's worked. The climax of the novel occurs when the Fed, who's previously has been all about the rules, takes the loan.

As I said, not really about the action, but about the dialogue, and the symbolism of the act. The Fed has made himself complicit in the criminals' world, and he's explicitly condoning it now. But the thread of corruption had been seeded long before - it's implied quite heavily that there are very few honest cops in Boston, and most of them are in on the system.

And why not? Nick and McKeach keep the streets relatively safe from the bloodbaths of the Mafia. There's a long sequence in the novel, all explained by characters, that chronicles the infiltration of the Mafia and the subsequent expulsion by the hands of Nick and McKeach.

This is carefully structured and controlled novel. While it may seem like Higgins allows his character free reign to go off on tangents and non sequiturs, really it's all about weaving a tapestry of speech, circling around subjects and letting the reader do the heavy lifting. This isn't to say that it's boring or work. It's quite fun and breezy.

At End of Day is a fascinating portrait of the symbiotic relationship between the cop and the criminal, all delivered in byzantine conversations and monologues. The dialogue is excellent, and other than a feel of sameness with the characters, I really enjoyed this book. I will definitely be reading some more Higgins.
Posted by matthew.