The Caretaker of Lorne Field

Here's a book that I was first in line to read about my local library. I'd heard about this guy and thought I'd give something a try by him. I like horror. Hopefully this guy was as good at horror as he is allegedly at crime. His last name is horrible to spell. 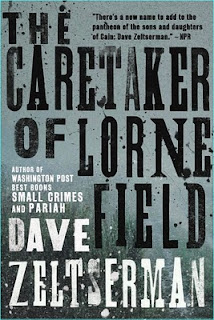 Jack has been the caretaker at Lorne Field since he was 21, taking over for his dad who had been the caretaker since he was 21, taking over for his father, and so on for nine generations. Their job is simple: remove the weeds growing on the field before they grow into vicious unstoppable monsters. But Jack's life is spiraling out of control as the town he lives in has turned against this quaint custom, his eldest son doesn't want to take over, and his wife has plans to turn the field into an amusement park.

Another horror book, another throwback to classic era Stephen King. If someone had switched the dusk jacket and had King's name on it, I would've believed it. Now, this isn't necessarily a bad thing. King is such an ubiquitous presence that he looms over any modern horror novelist.

Zeltserman isn't the world's greatest scare writer, so he goes with what he knows: the slow disintegration of a man's sanity. He sustains the ambiguity of the monsters for the entire novel, and it never feels like a cheat.

He wisely chooses to keep the point of view close, sticking mostly to Jack and only straying a couple times to show information crucial to the plot that Jack would have never seen. It's strength in focus that keeps the novel tight and the plot brisk.

Where Zeltserman falters is his dialogue. It's average for the most part, and there's only a couple cringe worthy sections. Some of the dialogue just never rings true, like a real person would never talk like that. It's unfortunate, but it's doesn't ruin the experience.

As for the monsters, the less the said the better. I feel that if the reader knows next to nothing about the plot, the novel flows a lot better. Understanding what's at the heart of this novel will simply derail all the fun in finding out.

The Caretaker of Lorne Field is a nice quick brisk horror novel that doesn't scare very well, but is still entertaining in its portrait of a man unhinged. It's tight and gets where its going with minimum hand-wringing. Certainly not a white knuckle ride, but a nice fun time in the darker regions of the imagination.
Posted by matthew.