The Day of the Scorpion

I have no idea why I stopped reading The Raj Quartet after the first book. I guess I was just overwhelmed by the sheer size and scope of The Jewel in the Crown. But I decided to read purchased books still sitting unread on my shelf, and I'm glad I continued with Scott's magnum opus, specifically the second volume, The Day of the Scorpion. 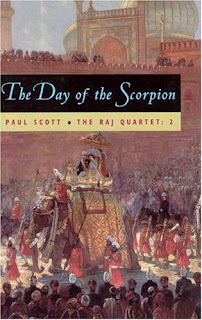 After the events of the previous novel, The Day of the Scorpion introduces the Layton family, including intelligent Sarah, her flirty sister Susan, and their host of aunts. Susan is getting married and the best man at the wedding is none other than Ronald Merrick, the superintendent in charge of investigating the rape of the previous volume. Merrick and Sarah begin a shaky friendship.

I think every problem I had with the first volume was corrected this time. I raced through the first 200 pages, almost breathless with Scott's beautiful prose and extremely careful plotting. It's extremely clear that Scott wrote this knowing full well the entire quartet's story. Unlike The Jewel in the Crown, this novel isn't fully concerned with telling the tale in voices. Instead, Scott lets the narrator describe in more formal manner. This helps a lot. It also sharpens the symbolism that Scott is meticulously crafting.

The scorpion is a very complex image in The Day of the Scorpion. It specifically refers to a memory of Sarah Layton. She remembers, as a child in India, a servant encircling a scorpion in fire, and the trapped creature killing itself with its own tail. The metaphor doesn’t become clear until Sarah is older and schooling in England. She realizes that the stinger was moving by reflex, that the trapped scorpion was merely trying to attack the fire. The scorpion as metaphor can refer to Indian politics/independence, but it can also refer to the British Raj as well. Circumstances have trapped the British in remaining in India far too long.

This just scratches the surface of the symbolism in the book. There's also a stone, thrown by an anonymous angry Indian, thrown at the wedding party, but directed mostly at Merrick. That stone resonants throughout the book. Merrick is trying to climb the social ladder, so he's left police work behind for a career in the military. He attaches himself to the Layton family, but things have a terrible way of turning out in the hands of Scott.

Merrick is such an interesting character. Scott has essentially crafted a 2,000 page narrative showing the corruption of racism and power, and there's no better or complex character than Merrick. He's not the personification, but a personification of all that was debased in the Raj. Nobody is innocent in this novel, but Merrick represents an attempt to show that oversimplifying this is dangerous.

Over the course of the novel, Merrick gets a chance to figuratively defend himself, as well as seek penance for what's happened in the past. During a long scene at the wedding reception, Merrick is stuck speaking to a Count, a Russian expatriate who works as a political aide to local royalty. The Count mercilessly interrogates Merrick about what happened during that time, and we get another perspective on the events of the previous novel, but Merrick ultimately shows us that he is utterly corrupt inside, no matter how nice he might act to Sarah.

Sarah, a definite moral centre, is also extremely complex. It's utterly fascinating to me that Scott gives so much of the stage to female characters. From Edwina Crane to Sister Ludmila to Lady Manners to Lady Chatterjee to Daphne Manners in the first book to Sarah Layton and to Lady Manners again in the second. Men are often held at arm's length from the narrative, given to us only as men of action.

A good portion of the book is seen from Sarah's point of view. Sarah was born in India, raised in India, and only briefly went to school in England. The outcome is that Sarah feels that she belongs to India as a concept, but not to India as a country. As I said, nobody is innocent in this book. While Sarah may feel connected to India, she remains distant, unable to emotionally confront Ahmed Kasim, another aide to the local royalty. She's unable to connect to anybody, save for distant memories of English relatives. She's tied to the past, a golden age and she ignores Forster's plea.

At the halfway point of the novel, the narrative drops the Laytons for a bit, and revisits Lady Manners. She's going to witness an investigation into the Bibighar Gardens-rape incident, an interrogation of Hari Kumar, imprisoned for a crime he did not commit. What follows is an incredibly tense 150 pages of Captain Rowan asking Hari to explain what happened. It's the only long section that Scott devotes to voices rather than description, but it's never confusing. We don't necessarily learn anything devastatingly new about the event, but we get another perspective, from another possible angle, the Indian raised as an Englishman.

There's many counterpoints in this novel, like a Sondheim song. From Daphne Manners to Hari Kumar and Sarah Layton to Ahmed Kasim. From Sarah to Hari. From Hari to Merrick. From Susuan Layton to Daphne. And so on and so forth. It's a crystalline structure that's amazing and brilliant.

Obviously, there's a ton to talk about when it comes to The Day of the Scorpion, but this isn't a scholarly paper, so I'm going to conclude by saying that I fucking loved this book. Scott has become one of my favourite novelists ever thanks to the one-two punch of the first half of the Raj Quartet. I'm eager to move on to the next book!
Posted by matthew.