I said I'd give Ross Macdonald another try, and I'm certainly glad I did. I went with what critics consider his transitional novel, the one that straddles Macdonald's own voice and his Chandler voice, a novel called The Doomsters. 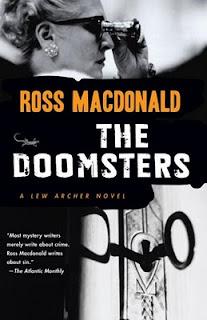 Archer meets an escaped inmate from an psychiatric institution, and he hires Archer to discover who actually killed his parents. Archer gets thrown into this family, one of wealth and means, and the lives shattered by greed and murder.

This started off pretty weak, with all sorts of authorial hand-wringing about how to deal with lunatics in a novel - make 'em crazy or make 'em misunderstood? Macdonald straddles the line for a bit, but the novel really gets cooking when Archer meets the corrupt cop and the corrupt family doctor.

When we arrive at the solution, it's surprisingly logical and fits, and the twists that take us there are complex and enjoyable. But it's not the solution to the mystery that's most affecting in the novel. It's the amazing weight that this takes on Archer. I spoke of this in the previous review, and this is where Macdonald shines.

Archer leaves behind a life of black and white dichotomy, a world where there's bad guys and good guys and he's on the side of the white hats. He finally understands that the whole family shares the guilt, the whole community shares the guilt and the culpability. It's an astonishing sequence - what could have been trite and irritating comes off profound and affecting.

Macdonald's use of imagery is still sort of weak. The Doomsters of the title refers to a poem that the deceased matriarch used to repeat. She was delusional and felt that these nameless doomsters were following her and causing destruction. Archer makes the conceptual leap that the corrupt family are the Doomsters, in a figurative way. It's obvious, but I guess for detective fiction, it's somewhat sophisticated. The central image is also used better than the underground man of the previous novel I read by Macdonald.

However, The Doomsters suffers from a lack of atmosphere. The fire that rages in The Underground Man was effective and useful. It created a miasma for Archer to wade through. In this novel, there's nothing of the sort. The locale is unimportant to the story, which is disappointing.

On the other hand, Macdonald's tough guy dialogue is way better in this novel. Previously, I was unimpressed with the prose, but Macdonald blew me away with The Doomsters. It was tough, lyrical and sharp.

On the whole, I really enjoyed The Doomsters. I'm glad that I gave Macdonald and Lew Archer another try. This is was a surprisingly deep and complex mystery buried under the captivating theme of the cyclical nature of greed. It's a great book and a great mystery. I will read more Macdonald!
Posted by matthew.