I was really impressed by David Goodis and Nightfall, so I thought I'd give another one of his novels a try. I went with Down There, which was adapted by Francois Truffaut into a 1960 French film called Shoot the Piano Player, which is the preferred American title for the novel nowadays. 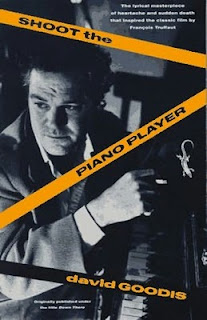 Eddie is a pianist in a saloon in Philadelphia who minds his own business and only ever pays attention to his piano. One day, his brother storms into the bar, on the run from two Mafia guys, and Eddie stupidly gets involved. A beautiful waitress by the name of Lena wants to give Eddie and hand and so begins a chase, ending with the revelation of who Eddie really is.

I didn't love Down There as much as Nightfall. There are two definite reasons why. The first is the structure of this novel is weak. If you were to chart the novel, you'd see intense rising action, a brief detour, another intense but tangential bit, and then another detour and finally the end. It's off-putting and stinks of amateur hour. While this may seem harsh, I just expected more from Goodis, a writer claimed to have produced 10,000 words a day.

The other reason why this novel isn't quite as good is the narrative voice that Goodis employs. The novel is written in third person limited (with brief forays into omniscience), that is to say most of the book focuses on Eddie, goes into his thoughts, but stays away from making Eddie the narrator. However, the problem here is that Goodis is not consistent at keeping the narrator and Eddie separate. A lot of the time, Eddie is giving himself a running commentary, I assume some sort of comment on his deteriorating mental state. Goodis would have done Down There a huge favour by sticking to one or the other. He should have just down full tilt with first person narration and let Eddie do the talking.

On the other hand, this novel isn't bad. In fact, it's quite good. Down There features one of noir's most prized and oft-repeated themes, ie you may be through with the past, but the past ain't through with you. Eddie's constant repression of memory, his family, and the past is the hallmark of the book. It's a gripping read each time something is revealed to the audience.

While I may have complained about the structure of the novel, I did enjoy the main plot of the novel. It's very simple, and very effective. Goodis could have even simplified the plot and I would have been pleased.

I was reminded a lot of No Country for Old Men with this novel, with the comparison in relation to the plot. The villains of both novels are unstoppable relentless creatures. There's a bag of money to be found that's really inconsequential to the themes explored. There's a regular person caught up in the mix, making increasingly poor decisions. I wouldn't be surprised if McCarthy said Goodis was an influence.

On the whole, I enjoyed Down There, but maybe not as much as Nightfall. It's a classic noir, archetypal, atmospheric, nihilistic and utterly bleak, and that's what I want from my noir. Other than structural and narrative voice problems, Down There is a great book and highly recommeded.
Posted by matthew.