The Friends of Eddie Coyle

I really liked George V Higgins' At End of Day. Really liked it. I'd heard that Eddie Coyle was his best book, though, but my library didn't have it. Finally I found a cheap used paperback and gave it a read. 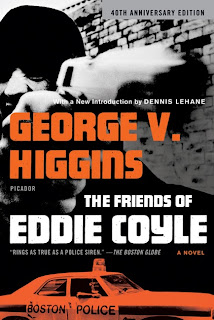 Eddie Fingers Coyle is a smalltime crook who's about to be sentenced, and he wants a good reference from a cop, so he concocts a scheme by which he rats out a smalltime arms dealer. Things don't quite go as planned, though.

My paperback goes to 186 pages, and while that may seem short, Higgins packs a good amount of plot into it. There's a couple suspenseful bank robbery scenes, a sting operation on an illegal deal, and some shooting. Plus, there's the copious amount of dialogue that Higgins seems to excel at.

Pretty much the same things that I had to say about At End of Day apply here. The plot is complex and mostly implied - the dialogue is amazing and circuitous - the subtext is focused - but with Eddie Coyle, there's something else.

What Eddie Coyle is missing is relaxation. When I said the 186 pages had a ton of plot crammed into it, I wasn't fully complimenting it. Sure you get a lot of bang for your buck, but - man - Higgins needs to take a breath and slow down. Let the story breathe. It's like Higgins is there at the art show with you, hustling you along from painting to painting before you get a chance to let the whole thing sink in.

It doesn't help the pace that Higgins' customary dialogue isn't quite as complicated or nested as At End of Day. Really, this is a fairly straightforward crime book with a nasty end. It's isn't difficult or hard to grasp. Certainly, Eddie Coyle could've used some space and a chance to deepen its themes.

Overly critical? Maybe. I still enjoyed the hell out of this book. Like I mentioned earlier, the bank robbery scenes are gripping reads. And while the conversations weren't dizzying, they still whip off the page like all expert dialogue.

I really liked Eddie Coyle, but I didn't love it. It could've used another hundred pages of development and complication. Other than this, it remains a taut read with some fantastic setpieces that show Higgins isn't just a master of conversations, but a great storyteller overall.
Posted by matthew.