Joe Hill's first novel Heart Shaped Box was a surprise. I wasn't expecting much, but I was taken in, and read it in one sitting. However, in the long run, I don't remember much about it other than its skillful characterization. Considering the novel's weak plotting, it comes off as a practice run, moving towards a more structured long-form novel, with well-drawn characters. Joe Hill then published Horns, his second novel, and I finally got a chance to read it. 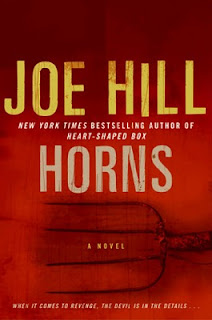 One day, after getting really drunk, Ignatius Parrish wakes up to find horn-like protuberances coming out of his forehead. As well, any person who sees his horns compulsively spill their inner thoughts. The thought to speech barrier is broken down. Ig learns that everybody in town hates him because of his girlfriend's brutal rape and murder from last year, in which Ig was the main suspect. But when Ig learns the awful truth of the crime, he decides to take some vengeance.

If another novel has ever started out so strong only to peter out so sadly, I can't think of one. This novel was a struggle to finish, and it's heartbreaking when one thinks about the strength of its opening.

The gimmick of spilling secrets is well done, sometimes shocking and sometimes heartbreaking, and Ig's slow desensitizing to the horns is also convincing and sad. Hill's characterization is almost always excellent with Horns. Each person we meet is believable and has motives and wishes and hopes and malice.

It's the plot that's terrible. Yes, terrible. The big reveal of who killed Ig's girlfriend is given in the middle, and then Hill spends almost a quarter of the novel in flashback to the murderer's past. Not only does this derail the forward movement of the plot, but it begs the question of why Hill felt it was necessary to fill in every single little gap in Ig's past with the other guy's.

Ultimately, all these flashbacks amount to boredom. Hill spends so much time showing us how evil the antagonist is and so little time showing us what the fuck Ig does with his new found power.

The promise of the horns is unfulfilled by the end of the novel. There's no horror or suspense. We know Ig is going to get revenge. We know he's indestructible, when the murderer lights Ig on fire and he survives. So where's the suspense?

If an editor had taken out all instances of the word "horn" then we would be left with the same poorly constructed novel. Utterly disappointed is my overall feeling with this novel. The metaphor of the horns and the devil by proxy is okay, but it always takes a backseat to flashbacks and nostalgia.

Horns was not good. I liked the characterization, but that wasn't enough to overcome the painful plotting and lack of suspense. This novel displays a fundamental lack of understanding on how suspense works and how to keep the reader's attention. I was bored and irritated for a good portion of the book, and that's not a good thing.
Posted by matthew.