When I was looking to read some new (and good) horror, Sarah Langan was a name that kept popping up. Everybody was falling over themselves to praise her including Peter Straub (an author who's work I've decided to loathe). So I grabbed her first book, The Keeper, from the library and went at it. 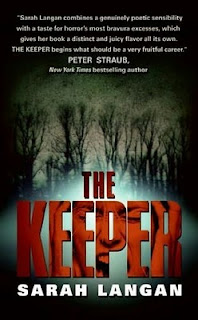 Bedford, Maine is a dying town. The mill has been closed, which is the final straw in a long slow decay for the town. There's also the local crazy girl that everybody dreams of, who wanders the streets, lets men sleep in her bed, and never says a word. When this girl is accidentally killed by her ex-boyfriend, the darkness that sits below rumbles to the surface.

But the build is great. Langan uses some amazing dream imagery to keep the townsfolk and the audience guessing about the nature of reality. There's some incredible scenes in the book that are absolutely chilling and there's some throwaway lines that hint at something so monstrous that's it is effective only because it's throwaway.

Langan seems to have a very firm and cogent grasp on oneiric styles. The only other author that I can think of who has such haunting images is J. G. Ballard. I was reminded a lot of Ballard with Langan, but in prose, but in theme. This is a novel, after all, about the disintegration of the system and the individual.

In addition to this, Langan has a masterful control over her characters. She uses effectively very spare details to sharpen and deepen her rather sizable cast. Most first time novelists have trouble fleshing out the supporting cast, but Langan does this rather superbly. The alcoholic teacher, the quiet morose sheriff, the lanky young mom, the grizzled old merchant marine, the ex-manager of the mill. All of these characters were convincing and breathing.

However, as aforementioned, the end is a bit of a sizzle, and it's related not to plotting, but an over reliance on dream imagery. Langan uses a bit too much symbolism to convey action instead of actual action. In horror novels, the symbolism should support the action, instead of replace it. It's like the ending to 2001: A Space Odyssey, except with a bit less opacity.

The Keeper, Sarah Langan's first novel, was really good up until the last few pages. Overall, I enjoyed the novel, and I'm definitely going to read another one by her. Her command of imagery and of her characters is skillful and strikes me as more of a seasoned veteran than a first time novelist. Very good.
Posted by matthew.