The Killer Inside Me

Here's another author I wish I had read when I was younger. I would have absolutely adored Jim Thompson when I was in high school, and most of his stuff was available. I should've bought 'em all when I had money to spend. Now, I'm broke, and the only Thompson my library has is The Killer Inside Me. I was able to grab it though and give it a read. 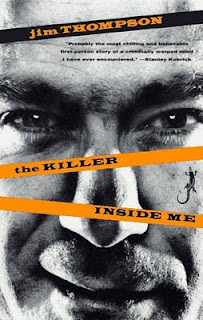 Lou Ford is a deputy sheriff in a small mining town in Texas, and he's got himself mixed up with a local prostitute, a blackmail scheme, and the local rich man's son. Ford sees no other way out than murdering anybody who can implicate him. What starts out simply ends with Ford trying to control the killer inside him.

Remember when I said that Nightfall was hard as fuck? I had no idea. This is one of the hardest harrowing noir novels I've ever read. This book is a fucking masterpiece. It's lean and unbelievably mean. Lou Ford is one of the most despicable protagonists in American literature.

What's amazing is how well it works. How Thompson uses little things to make it all work. For example, when speaking to people, Ford speaks mostly in cliches and idioms, trying to sell that he's a hick of low intelligence. But he goes to great lengths to convince the reader that he's actually smart. He's looking for approval. The person he's narrating for? Is it his father? That he was too cool to try and impress, but now wants to? Not sure. It's not clear.

The violence is harrowing. The outlook is bleak. The characters low and depraved. There is absolutely no moral center in this book, and it's awesome. This is exactly why I read noir, so that I can stumble across a work like this.

The Killer Inside Me is a masterpiece of noir. I had such a great time reading this, and I want to read more by Thompson. I'll have to settle with watching the latest greatest adaptation of this novel, directed by Michael Winterbottom.
Posted by matthew.