The Killing of Worlds

Okay, let's just dive into this, shall we? 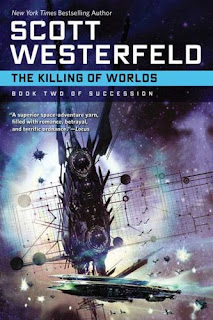 Remember the climax of Star Trek II: the Wrath of Khan – when the respective ships commanded by Kirk and Khan are in that energy cloud, and it’s all about manoeuvres and tactics? Moving their ship this way, and responding to the other ship’s motion with something else? Remember how that was part of what made Wrath of Khan so good? Okay, well now imagine you’re reading it, and it lasts 150 pages. That’s the opening of The Killing of Worlds. It’s tense and exhilarating. Another factor that makes this long form action scene work is that Westerfeld so utterly complicates it with a fluid concept of time, which seems realistic. The speeds at which these ships and attack drones fly at are way faster than the naked eye. It makes sense that there would be relativistic effects on nano-sized drones.

The Killing of Worlds is quite a similar animal to its predecessor. There’s the really long opening action scene, the middle parts of setup and exposition, and finally the climax, which is more setup than resolution. Yes, the end of this novel doesn’t wrap everything up in a neat little bow, but Westerfeld implies the end of a few different plot strands.

But is this second half better or worse than the first half? Not necessarily worse, but then again not necessarily better. Certainly, elements can be qualified as superior, such as the character development. There’s an enemy commando alone in the Empire’s world, and she kidnaps a data analysis expert to steal her identity, and the relationship that develops between the two is multifaceted and very engaging.

On the other hand, there's lots of political stuff going on in here. Luckily, Westerfeld doesn't sink the political action into turgid and purple posturing, like in the Star Wars prequels. At no point did anybody care what was happening in the Senate in Star Wars. But with The Killing of Worlds, the whole thing climaxes in the Senate, and it works. One just has to make their way to it through pages upon pages of setup, post-chase scene.

It works because it's a climax and a reveal, the reveal of the teased-at epic Secret. The solution to the secret? I won't spoil it, but Westerfeld has obviously done his physics homework.

The Killing of Worlds moves like a freight train. It's fast, lean and mean. It's a great read. Combined with the previous volume, you're looking at a classic entry in the space opera genre. But I'm not wholly convinced that either of the books say anything beyond "technology = good" and "subjugation = bad". It's not terrible that the Succession series doesn't say anything deeper than that, but I would have enjoyed a little bit more depth. Otherwise, I recommend this to fans of space opera.
Posted by matthew.