The Man with the Getaway Face

I've always meant to read Richard Stark and his bad boy thief Parker. Ever since I saw Payback with Mel Gibson, I've had a jones for it. Payback is one of my all time favourite noirs, and I can quote whole passages. So I got around to reading the second in the series, called The Man with the Getaway Face. 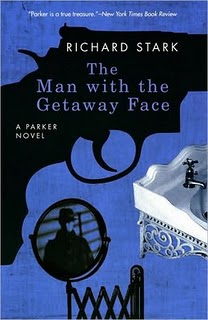 After going up against the New York syndicate in the last book, Parker is on the run, and he goes under the knife, changing his face, by a weird plastic surgeon with a tough guy chauffeur. Once he's healed, Parker gets mixed up in an armored car heist, conceived by a busty waitress looking to double cross. Of course Parker sees it coming, but what he doesn't see coming is the surgeon's chauffeur. It seems somebody killed the surgeon and the chauffeur's looking for blood - Parker's that is.

This book started out amazing. I was in love with every sentence, every tough guy act and growl. I loved the setup, how Parker sees all the angles, and I loved the characters. However, everything derails at about the three quarters mark when the structure of the novel completely falls apart.

After the heist goes off without a hitch, Stark stalls Parker's narrative and switches to the chauffeur, who's trying to hunt down the killer. When he gets into trouble, Stark rewinds and shows the same thing again, but from Parker's point of view.

The armored car heist is the meat of the novel, and everything after is denouement. Or at least, it would be in a normal book. But there's this extended tying up of loose ends, and it's tedious, except for when Parker goes balls out and shows he's quintessential noir.

Without spoiling anything, the very last couple pages sort of make up for the weird detour into the dumb chauffeur's head. Parker does some pretty foul and lowdown things and we're constantly rooting for him. That's the mark of success.

The Man with the Getaway Face was fun for the most part, but a very strange "what are you thinking" detour derails the novel. The saving grace is the relentless thunder of Stark's prose, and the perfection of character that is Parker. I can't wait to read another Parker novel.
Posted by matthew.

Tangled Up in Books said...

Interesting that we both enjoyed the book, but for different reasons. I also enjoyed the opening, the initial set-up, but thought the entire heist and the planning of it was rather routine. The book really kicked in for me after the heist when Stubbs goes to work. I thought it was not only a great contrast - how Stubbs goes about "fixing" things vs. how Parker does - but also a interesting look at what Parker chooses to do in the last section of the book. Of course you're right about Stark's prose and characterization: spot on. Enjoyed your review!