Sarah Langan was contractually obligated to write a sequel to The Keeper. Now, when I found this out, it put a sour taste in my mouth. Most "contractually obligated" works are lifeless and forced, with the artist not putting everything they have behind it. But I liked The Keeper enough to give The Missing a try, based on Langan's strong skills. Hopefully I wouldn't be thrown off. 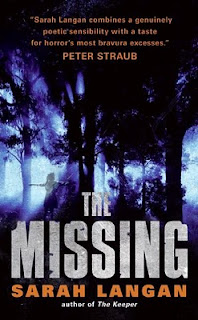 After the town of Bedford has its mysterious meltdown, the neighbouring town of Corpus Christi moves on with its lives. That is until a fourth grade teacher takes her class on a field trip to the woods between the towns, and a little mischievous boy brings something back, a viral infection. Within days, everything has changed.

I shouldn't have been worried. Even with a contractually obligated novel, Langan delivers. In fact, I would say that this is better than The Keeper. It is dark, mean, vicious and relentless. Langan uses similar tricks, but more effectively this time. She purposefully builds her little town, populates it with very well drawn characters, and has them do awful awful awful things.

But with The Missing, Langan doesn't pull any punches. This might be one of the more harrowing and bleak horror novels I've read in a long time. And it works because Langan puts everything into her characters.

Some of the more effective scares in the book work just like in her last, that is to say, throwaway lines and casual mentions of horrific things, and it's the laissez-faire style that creates the true horror, juxtaposing the normal tone against the obscene.

However, the novel could do with a little trimming. This is especially true of the opening sequences, particularly the library scene. This goes on way too long. The book is slow to build up speed, and it struggles a little in the middle. Once the infection has hit the town, Langan tries to maintain a balance between moving the characters around in their lives and having the terrible evil hit the world. The result is a bit of a lag between the two. Realistically, if shit was hitting the fan that hard, regular people wouldn't be doing normal things - they'd be getting the fuck out of dodge.

The Missing is a great horror novel. It's cut-throat, harrowing, and is written with skill and well drawn characters. Anybody who's looking for something beyond the paranormal romance genre could do themselves a favour by reading The Missing. Horror needs somebody like Langan, somebody not afraid to go into the deep dark and come back with a great story.
Posted by matthew.