The great thing about a library is that I can try new authors without buying. I mean, I can't believe I didn't make use of the library until I was out of university! I decided to give David Goodis' Nightfall a try, based on some recommendations via Amazon. 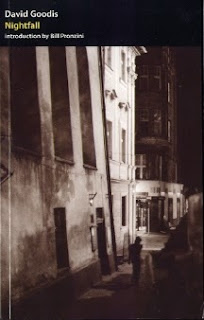 Jim Vanning is a commercial artist living in New York who's being hunted by a trio of nasty criminals. Or Jim Vanning is a murderer holding onto 300,000 dollars from a bank robbery. Fraser is the cop assigned to figuring this all out, and he's confused as all hell. Who to believe?

Nightfall is, to use some profanity, hard as fuck. This is the ultimate tough guy book. The dialogue is staccato, the atmosphere thick and oppressive and the characters lean and mean. I really loved this book. It reads like a fast thriller, but it says something about identity along the way.

Goodis very skillfully makes the identity of some the characters ambiguous for most of the book. It's not until the halfway point where we learn the truth about Vanning, but at the same time as this is revealed, Goodis sets up another shadowy identity crisis in another character. The audience is always questioning who someone is. It's extremely effective.

It helps that Goodis has a background in poetry. While his dialogue is extremely effective and sharp, his descriptions benefit from lyricism.

However, Goodis' structure leaves a lot to be desired. The weakest part of this novel is when Goodis shifts the perspective to somebody other than Vanning. He lets Fraser, the cop, be the point of view, and it's off-putting and ineffective. Goodis is trying for comparison, using Vanning, Fraser, and the main antagonists as points on a triangle, but it doesn't quite work.

Also, the ending isn't as badass as I was hoping. Vanning is thrust into a situation that he can't possibly get out of, the evidence, real and fake, mounted against him, but Goodis manages to tie it all up with a neat little bow, a happy ending. It almost compromises the hardness and noirness of the rest of the book. It's not a fatal mistake, though.

Nightfall is a fantastic and ballsy noir novel. Goodis never lets up, either with the themes, the staccato dialogue or the lyrical descriptions. True to the genre, things are dreamy and hard to believe, identity is mercurial, and it's hard as fuck. I loved this novel, and I'm excited to read more by Goodis, although it's going to be hard to come by him, as he's mostly out of print. Wish me luck.
Posted by matthew.