The Power of the Dog

California fiction really does it for me. I especially love noir or crime set in Cali. Just trolling around on the web allowed me to discover Don Winslow. He's written a lot about California, and the best reviewed book in his repertoire seemed to be his gigantic novel, The Power of the Dog. I picked it up and read it, so let's go. 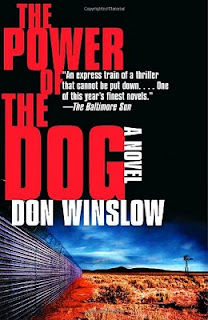 Art Keller is a DEA agent, looking to bring down the Mexican drug cartels. Sean Callan is an up and coming Irish hitman in a predominantly Sicilian industry. Nora is a very beautiful, very smart, very professional top of the line hooker. Father Juan is a priest with a big mouth. And more. And over the course of three decades, they engage on all sides in the War on Drugs.

Have you seen Steven Soderbergh's Traffic? Have you read later-era James Ellory? What if you combined them both? Well, then you'd get The Power of the Dog. And that's not a criticism. This is one of the best novels on drugs I have ever read.

It's huge in scope, and Winslow keeps the information and the plot flying at an amazing rate. He's certainly learned at the school of throwing everything at the reader and trusting they'll keep up. If they do, they're going to be entertained.

Winslow's prose is as sparse as they come. Sentences are brief and contain only the most essential of information. Very rarely does he allow tangential information to be released. What makes this approach work is his relentless and breathless pace. There is hardly a moment to sit and cogitate on events. As soon as something goes down, Winslow whisks us off to another training camp in the jungle, into the mansion of drug lord, into a fire fight in the streets of Tijuana. There's so much action, and Winslow keeps it clear and cool.

I had so much fun with this book. The action's great, the characters decent, and it's incredibly epic. When I started reading it, I was distracted by comparisons to Ellroy, specifically his Underworld Trilogy, but eventually, I was won over by Winslow's distinct voice and the hammering on of the plot.

If there was a complaint to be made, it's the rather 70's style approach to sex. Everybody's a sex god in this book, and it's irritating. Whenever I read a novel like this, but published in the 70's or earlier, there's this obsession with having the cast get it on, and they're all just - gosh - amazing in the sack. People can't just have sex in The Power of the Dog, they have to have mind-blowing epic sex that shakes the windows with screams. It didn't ruin the book, but the adolescent approach is distracting.

Other than that, The Power of the Dog is a fantastic gripping read. It's a page-turner in the classic sense. I loved Winslow's unrelenting plot, his control over description, sparse prose, and just plain awesomeness. I am most definitely reading another Winslow novel. Good thing he's a prolific publisher!
Posted by matthew.