Space opera! There's a reason why Star Wars rules, and that's cause space opera is often awesome. I thought I'd read some space opera and give crime and horror a break. I'd heard about this Scott Westerfeld character and his duo Succession. I read the first one. It might seem unfair to review half of a novel, but dammit it's my blog and I'll review in whatever format I feel. 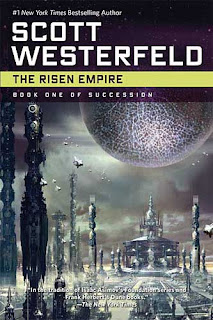 There's a war brewing between the Empire and the Rix, two systems so ideologically opposed. The Empire is controlled by a ruler who has managed to cheat death, and stay in power for 1600 years, whereas the Rix are only interested in propagating their vast AIs. When the Rix kidnap the sister of the Emperor, an elite frigate warship led by Laurent Zai is sent. But there's more to the Rix's plan than simple kidnapping.

Here's some balls to the wall epic badass fiction to kick you in the face. This novel started out so frigging strong that I read half of it in one sitting. Westerfeld starts the novel media res, with the Empress already kidnapped. We start right in the middle of battle, and The Risen Empire doesn't let up for 150 pages. When Westerfeld finally releases the tension, he plunges the reader into a couple different plot strands that will no doubt converge in the next volume.

Structurally, this is an interesting animal. The plot is so unbelievably focused on one strand for half the novel's length. Westerfeld does little heavy lifting in regards to back story. He reveals only enough for the reader to comprehend, but really, not much is needed. This is strictly a Rebel vs Empire level complexity.

But once this strand comes to a head, Westerfeld indulges in multiple important characters and then slowly moves his pieces across the board.

Frankly, one has the admire the ballsiness of such an approach. I've never read a book so second-half heavy before. The fact that he carries it off is impressive.

What isn't is Westerfeld's tendency to use science-y words to describe things when regular words could have sufficed. It's the way space opera seems to have gone nowadays. This tendency no doubt influenced by Roy Batty's dying speech, I guess. It doesn't make the work any more or less believable. I'm already hooked, you don't have to keep trying so hard.

While that habit is distracting, it's negligible beside Westerfeld's stunningly evocative description. There's a scene in which a crewmember of the ship pours water onto a table to watch the artificial gravity move the tiny puddles. It's didactic as all hell, but he really nails describing the table and water. If I closed my eyes, I would've been there. When Westerfeld drops the jargon gimmick, he hits out of the park with description.

The Risen Empire is a fantastic space opera, full of action, danger, romance, pew-pews, and it's seriously epic. I'm excited to read the next chapter in the sequence.
Posted by matthew.