So I said I wasn't going to read a million Leonard novels and get sick of them. I would try one more, and see how that goes. I chose a random one, Unknown Man #89, and went with it. 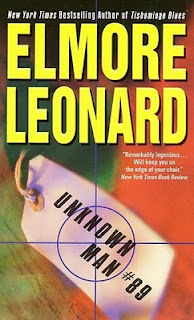 Jack Ryan is a process server who never gives up and always finds his man. A strange lawyer hires Ryan to track down an unknown man, owner of a mysterious stock, so that the lawyer can relieve him of the stock and make some money. But all is not simple. The missing man owes money to a crazy hoodlum, and now everybody's on the trail.


It's a simple crime setup, with simple characters and a basic linear plot. But it mostly works, because of Leonard's storytelling gifts. He's making the "ordinary" crime story captivating and engaging, all due to his skills with dialogue and character.


Yes, Jack Ryan's voice has pretty much every other Leonard protagonist's voice. But that voice is dripping with cool. It's not a bad thing to have a whole novel function just because it's all about the cool. It's not the greatest thing either. The novels succeeds as a whole if everything works together.


Unfortunately, not everything is gravy with this book. The plot moves in a really weird way. After the initial setting up of the plethora of villains, Leonard changes gears by having the missing man's drunken wife go missing herself. She turns up sober at an AA meeting. It's very lucky that Ryan is also an AA goer. Lucky for the plot, that is. Once these two meet up again, the wife very conveniently forgets who Ryan is and what he's after. He hatches a plot to turn things around but then falls in love with the broad.


That's a weird turn in plotting. And it's not terribly effective or believable. The character of the wife changes so drastically that it's almost another person. Sure, some of that can be attributed to sobering up, but it can also be assigned to poor character development. Also, I'm fairly certain Ryan only falls in love with the wife because she's the only female character that's not a stripper.


Of course, this turn of events makes for strange pacing. The novel slows the fuck down when the wife takes a powder, and Leonard has the two protagonists fall in love. It's boring, is what it is. I didn't read this book to watch two ex-alcoholics discuss their boozing and then fuck. I read this book to experience cool badasses shooting the shit out of each other.


Yeah, it does happen. In fact, there's an incredibly suspenseful sequence in which a crazy guy with a shotgun slowly chases Ryan down a busy street, with no concern for civilians or property destruction. It's a pretty ballsy scene and it's very effective. That's the highlight of course. Leonard's novels are plagued by anticlimaxes and this book delivers in spades. It's not the most terrible ending, but it could've been better.


Unknown Man #89 is not a perfect book. It has some strange pacing and plotting issues, and a stock anticlimax. But the dialogue and action is pitch perfect as usual, and you get a lot of the former and a bit of the latter. It's still an enjoyable read, but maybe recommended only for established fans of Leonard. Newbies would be best suited with a different book. Oh well.

So what am I reading now? Judging by my absolute scattered approach to genre, it's impossible to accurately predict what's sitting on my nightstand. But I will tell you. I'm giving The Constant Gardener by John Le Carre a try. I've always wanted to read something by him, but I'm always defeated as soon as I start, and it's mostly due to Le Carre's slow plotting. I'm also getting back on the Raj Quartet train. I started the second book, The Day of the Scorpion, and I'm determined to finish this tetralogy. If you want, you can read my review of the first book by clicking the title, The Jewel in the Crown.
Posted by matthew.