J. M. Coetzee is a good reliable author. I was looking at Coetzee novels to read, because I hadn't read one in awhile, so I thought I'd give the first book in his weird biography trilogy a go. Here's what I thought. 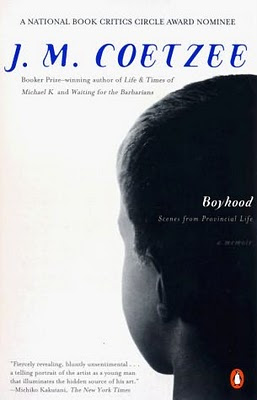 The nameless protagonist of Boyhood is growing up in South Africa in the fifties, son to a Afrikaans attorney father and English former teacher mother. He is an avid reader, distrusting of his father, cruel to his mother, exceedingly smart, but always confused at the different people who live in South Africa. The protagonist is growing up in this country of many worlds.

While this is a slim volume, Coetzee really does a lot with a limited cast and a limited scope. It's told mostly in episodic format, but there is a development over the course of the novel, as John (the child) grows up and reaches awkward adolescence all of which Coetzee details sharply.

But I didn't love this novel. It's a very minor low key work, imminently forgettable save for a fantastic chapter set on a family farm in the veld. Coetzee's prose is simple and clear, but distant from the poetic fullness of his prose in other works.

Boyhood shares a couple things with Coetzee's obvious masterpiece, The Life and Times of Michael K: the protagonist with mother issues, the difficulty of duality in identity, and the love of the natural world, the land, the nature. But where Boyhood differs is Coetzee's timidity. Boyhood could have been something more, something transcendent, but it's missing it.

It's hard to understand why. It's not like Coetzee really needed to create characters or invent situations. Everything supposedly comes from memory.

Boyhood isn't a bad novel, though. Not at all. For it's 166 pages, it's utterly fascinating. I've never been to South Africa, so I have no previous experience with his 1950's childhood. The book is good if only for Coetzee's descriptions of what life was like back then. But this isn't a history book, and one can't judge it by those standards.

While I liked Boyhood, I don't think it's anything more than average quality. That being said, average quality for Coetzee is still miles ahead of most authors. Even if Boyhood doesn't reach the heights of previous works, it's still a fascinating, entertaining read.
Posted by matthew.