Well, we've come to the end, and I'm equal parts elated and sad. It's always bittersweet to finish something you've liked so much, but it had to be done. The third book ends on a bit of a cliffhanger, so I was mighty interested in getting my mitts on the fourth book. Too bad there's a two month waiting list at the library. What ho? What's this? My g/f gave me the rest of my Christmas gift, and yes, it's the complete set of books. Let's dive into the fourth and final volume of the Red Riding quartet. 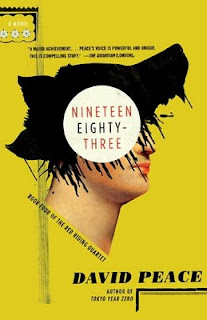 Nineteen Eighty-Three follows three narrators across about 11 years. There's John Piggott, solicitor who has been tasked to appeal on behalf of Michael Myshkin, convicted of murdering the missing girls from the first book. Piggott is the "moral" character of this book, as Peter Hunter was of the last one, and Jack Whitehead of the second book.

There's also Maurice Jobson, a brass cop dubbed the Owl due to his thick glasses. And finally, there's BJ, the rentboy and frequent supplier of info to previous narrators.

Piggott's narration follows the 1983 course, as another ten year old girl has gone missing. Jobson and BJ, on the other hand, jump around in time, filling in gaps from the past three books, recontextualizing events.

While I say that the two narrators fill in the gaps, I don't mean they explain or reveal everything there is to know. Surprisingly, the solution to both mysteries of the entire series comes from the end of the first two books. But that's the point. This isn't a whodunit. In fact, it's harder to figure who wasn't involved in some way with this giant cast.

Peace's style is as expected: short, staccato, blunt, and oblique. He spices up a little using three different techniques for the three narrators. One is in first person present, another in second person present, and finally in first person, but using third person. This last one, BJ's narration, can be irritating, if only because when BJ is narrating, he's speaking in third person and omitting words such as "the". An example of this:

This could definitely be irritating, but somehow it isn't. Even the second person narration isn't annoying either. Maybe it's because I had already read a thousand pages of Peace's staccato style, so I was willing to go along with anything. Or maybe it's Peace's extraordinary storytelling skills.

Certainly the oeuvre as a whole is a work of art. I've previously read books about police corruption, about conspiracies, about the evils that men do, but never before have I been so totally engrossed and immersed in that noirish world. Peace completely engulfs the reader with just enough detail to sustain his image, but not enough to make it a history lesson.

Nineteen Eighty-Three is the most impressionistic of the quartet, I find. It's more ambitious and more interested in grander themes and ideas than the last three. It's a great finale that summarizes, recontextualizes, twists and turns what's come before.

But that impressionism can work against Peace. I personally would have enjoyed a bit more clarity in events. There's a hundred characters, most of them important, and over 13 years of history to know. It's already going to be complex, but when you add in Peace's distaste for directness, it's really complicated. Ultimately, I understood what happened to the major characters, and I understood what happened as a whole. I just would have preferred to know a little bit more.

The Red Riding quartet is a masterpiece of style and theme. Peace has created an amazing work of art that will last a long long long time. Nineteen Eighty-Three kept up the insanely high level of quality set by the other books, and I wasn't disappointed in the ending at all. There's even some catharsis to be had, and it's pretty damn satisfying.

Stay with me, because now I'm going to watch the movies!
Posted by matthew.