Okay, let's get right into it, shall we?

It's three years later, and the police still haven't caught the Yorkshire Ripper. Under pressure from the public, the upper echelons have brought in Peter Hunter, a clean cop from Manchester to head up a second investigation, looking back on how the police have handled the case thus far.

As soon as Hunter starts getting into things, connections are being made that somehow implicate Hunter himself with crooked property owners, pornographers, and some bent cops. Hunter struggles to retain his reputation and still manage to investigate a police force that resists, sometimes violently, any outsider. 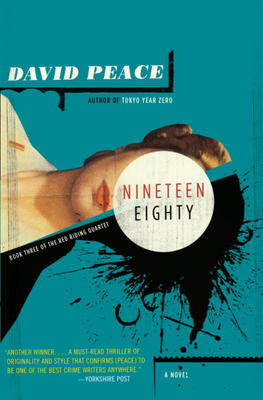 Peace has reached the three quarter mark of the Red Riding quartet, and it's still going strong. I might consider this to be the strongest of all three so far, actually. Peace chooses to keep with a single narrator, one who isn't totally crazy at the outset. In typical fashion, Peace slowly tears away Hunter's sanity. It works best in this book because the starting point was so normal. The nervous breakdown, inevitable it seems, is organic and authentic feeling.

Hunter's downward spiral is matched by the style of narration. Probably the best synthesis of style and subject I've seen from Peace. This isn't to say that it didn't work in the last two books, but it somehow manages to gel better with Nineteen Eighty.

I found myself comparing this book to the Raj Quartet while I was reading. Not just because of the superficial similarity of quantity, but both Paul Scott's and Peace's retreading of ground, going over and over the same facts, but then shedding a different light on them later. This is especially true with Nineteen Eighty. There isn't as much "new" information in terms of intricate conspiracy. Hunter spends a good portion of the novel just going over events we've previously seen.

What new information there is to be had is of the fate of Jack Whitehead and what the Ripper has been up in the past three years, and he has been busy. If you hadn't got your fill of descriptions of gruesome corpses with the past two books, then you're in for a treat. For a small amount of pages, this book is a real chore to read. Not because of quality issues, but because there's only so much goddamn gore I can handle in one sitting.

This is also the saddest of the three books so far. Hunter isn't a bad guy. He doesn't fully deserve what happens to him. Peace puts him through the ringer, that's for sure. And while it's not "fun" to read Hunter's descent, it's utterly gripping and nerve wracking.

Peace manages to sustain that crazed pace from the last two books, and he manages to do so even with the inclusion of domestic interludes that shed light on how fucked up Hunter was before being assigned his new post.

But there are a couple problems to be had with Nineteen Eighty, none of them especially devastating. First is the newest feature of the Red Riding quartet: at the beginning of every chapter, there's a solid page of small point text that reads like a cross between TV news and interior monologue, usually from the Ripper's victims. I understand why it's included (humanize the victims) but I never liked reading them. They feel like affectation, like Peace didn't think he was artsy enough, so he added it in for respectability. They don't feel authentic, and that's a crime, seeing as how they're supposed to be interior monologue.

The other problem I can't go into major detail because of spoilers, but suffice it to say that during Peace's usual final act, when he reveals things and twists things, there comes a revelation that's utter nonsense and is a total cheat. A good twist should outsmart the reader, but play fair. An astute or observant reader would pick up on the clues. The twist that mars the end of Nineteen Eighty doesn't ruin the book or the overarching plot. In fact, it can be considered forgettable in the grand scheme of things. But the twist's unfairness and how it changes something fundamental about a character makes it irritating.

Other than those couple issues, neither of which are major, Nineteen Eighty is an impressive feat. Using his unique voice and his unique style, Peace has carved out a chunk of history and called it his own. I can't believe these books are more widely read or more critically acclaimed. So far, at the three quarter mark, I'm willing to call the Red Riding quartet a masterpiece.
Posted by matthew.