I have a funny relationship with David Peace's Red Riding Quartet. I put the first book on hold at the library, about a year ago, and some douchebag didn't return it. Finally, the library bought a replacement copy, and I was able to read it, but of course, some douchebag didn't return the second book in the quartet, so I can't read that until my library replaces that one, too. Which is a shame, because I really want to continue with this series. I don't want to watch the movies until I'm finished the entire quartet, not only because I don't want the books ruined, but because when I tried watching the series, I couldn't understand their deep Northern accents (and I'm normally good with accents). So... unfortunately, I have to wait. But I still read the first book. 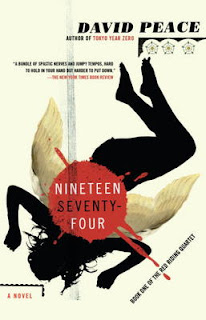 A little girl named Clare has gone missing. Eddie Dunford, recently promoted to crime correspondent for the Yorkshire Post, has been tasked with reporting on this. He's just buried his father after a long illness, and he's a little messed up from it. Eddie notices a pattern between Clare and two other girls, but when he starts to look into the link, the police advise him to let sleeping dogs lie.

When Clare's mutilated body turns up, Eddie makes it his personal mission to uncover the secrets of this town. One of Eddie's colleagues is murdered, and he leaves a bag of evidence for Eddie to find, and it shows a link between these missing girls and the powerful men in the town, men in control of construction, the police, and a new shopping mall being built.

Absolutely - brutal. There's almost no other word for it. Brutal. Nineteen Seventy-Four is a a very effective punch in the face, not just in terms of the sheer brutality of the plot, but of Peace's ridiculously sharp prose.

There's no way to avoid this comparison, but Nineteen Seventy-Four is like James Ellroy in Northern England. Peace employs that same quick sparse staccato prose that Ellroy has so refined, but Peace doesn't bother with affecting slang. It's too ornate for Peace. What Nineteen Seventy-Four does is give the barest of all description because that's not what's important.

The themes are shared by Ellroy and Peace, however. Massive corruption, and the madness that occurs to those in power. I have never read a book that features this much corruption. There isn't a single innocent in this whole town, apparently, save for the little girls murdered and tortured beyond imagination.

This is a sick book. It's not going to give anyone a warm fuzzy feeling. Especially when Peace gets to the last third of the book, and the truth begins to be revealed. But there's more to this story than meets the eye, apparently. Not every question is answered, but certainly lots of blood is spilled to try.

Peace keeps an incredible pace throughout the book. It's extremely fast and there's tons of background information to retain, so this is not for the lazy Sunday mystery reader. One has to pay attention. But Peace never makes it confusing or needlessly obfuscating. It's a careful balance that the prose keeps, between revealing and keeping the speed up. It's hard to believe that this is Peace's debut novel.

I really liked Nineteen Seventy-Four. Really liked it. I can't wait to re-read it, once I've finished the entire oeuvre. It's a masterpiece of crime fiction. This is true noir; there is no morality. But it is not for the faint of heart. I am superexcited to read the next book - sigh.
Posted by matthew.