I started and stopped probably six books in the past week. It was exam time, and I was training for a new job, which meant less reading time. But my girlfriend, probably the best one in the world, decided to help me out of my reading funk with an early Christmas gift. She gave me the second book in the Red Riding quartet, and I read it in about one day. 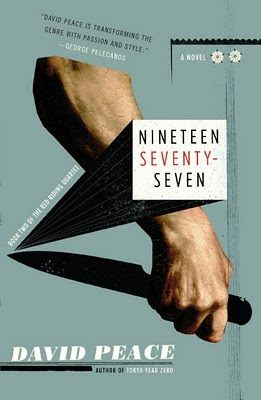 Jack Whitehead, crime reporter for the Yorkshire Post, and Bob Fraser, detective for the Yorkshire police, are both going through personal hell. Whitehead is still in shock from Eddie's fate back in 1974, while Fraser's father in law is dying of cancer. Both of them are dealing with what's been called the Yorkshire Ripper, a killer of prostitutes. Of course, things aren't as simple as they seem, especially when the two men get involved with prostitutes and their lives unravel completely.

Peace's style has evolved slightly since the previous volume. He's hardened it, refined it, made it even crisper. He still has some occasional problems with coherency or overall clarity, but his Ellroy pastiche has moved on from imitation to his own voice. It will be interesting to read the next two volumes to see where his voice takes him.

Some readers will no doubt be turned off by Peace's unrelenting bleakness or by his stylized prose, which is characterized by repetition, short staccato sentences and tons of obscenity. But it's his style that sustains Peace's best trick up his sleeve: his absolutely manic pacing. Both books I've read by him are just nonstop. Because Peace needs to do so much exposition, Nineteen Seventy-Seven could have been bogged down. There's a lot of heavy lifting to do in terms of characters and plot, if the plot is going to last for three books. Peace succeeds at all of this because of his confidence in his style.

I've been going on about the style and tone of the novel, but I haven't really said anything about the subject. Rest assured, if you were disturbed and abused by Nineteen Seventy-Four, you're going to get the same reaction from this book. This book descends as low into the murk and dark as possible for fiction. This is true noir: no light escapes Nineteen Seventy-Seven.

To top it all off, Peace even manages to make his imagery stand out. His symbols start to compound, the benefit of the series structure as opposed to standalone novels. The wings of the last book come back, and Peace develops that slightly, but also sets up other images that will no doubt reverb throughout the last two books.

Nineteen Seventy-Seven is the whole package: a gripping taut read, an important work of social commentary, an impressive and complicated mystery, and a large sizable cast that mostly stays delineated. With only his second book, the Red Riding Quartet is going to go down as an extremely important and classic work of art.
Posted by matthew.