I found the smallest Booker Prize winner and gave it a go. Here's what I thought of the 1979 winner. 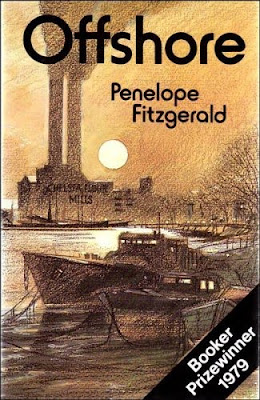 On the river Thames, there lives a collection of people in houseboats. There's Richard, married to Laura. There's Maurice, a male prostitute. There's Nenna, a single mother of two. There's Willis, an artist. They all reach a crisis, and deal with it.

I hated this book. Hated it. I wasn't sure at any point if this was a comedy or a tragedy. The tone is so off putting that I struggled to finish a 140 page novel.

Penelope Fitzgerald, the author, introduces a sizable cast, considering the book's short length, and she only bothers to develop maybe two or three of them. The characters are mostly interchangeable, especially in voice. Every single person seems to have the same stilted distant dialogue, with oddly formal vocabulary, including the eleven year old. But even the eleven year old can be switched with the male prostitute, and the results are the same.

I know what the book is about: people living in between worlds, the land and the sea, their divided selves. It's not good when the exceedingly helpful dust jacket does all the thematic heavy lifting. Only at a couple points does Fitzgerald allude to her thesis - no, allude isn't the word for it. Perhaps a better way of saying it is that when Fitzgerald mentions her theme, she points to it with neon signs.

I think the major problem of this book, the one from which all other complaints stem, is the novel's length. It's either too short or too long. If Fitzgerald had written another 100 pages, and drawn her characters out a little more, I probably would have liked it better. Conversely, if this novel had been trimmed to short story length, I would have no doubt loved it for its minimalism. But Fitzgerald tries to have it both ways, striving for minimalism, but complicating it with detail.

I hated Offshore. I thought the tone was so off putting as to make the novel interminable, an amazing feat for a 140 page novel. I hated the interchangeable characters. I hated the forced themes. I'm not even convinced Fitzgerald even said anything relevant about the duality of her own cast. I will not be reading another novel by her.

Looking at the novels shortlisted in 1979, I can see why the Booker Prize was awarded to this slight, disposable volume: there were no alternatives.
Posted by matthew.