I read this book because of the write-up that io9.com did on this book. The article made the book seem interesting and epic, and it won a Hugo, so it can't be that bad. The writer of the article compares The Snow Queen by Joan D. Vinge to the ultimate space opera, Star Wars, but with a feminist angle. That doesn't bother me. Feminist science fiction has been an excellent subgenre. Hopefully, The Snow Queen holds to that standard. 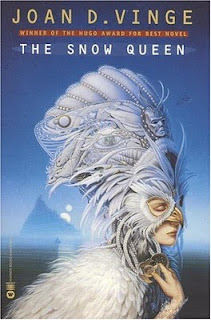 Every 150 years, the planet Tiamat is closed off to the rest of the Hegemony, and to commemorate that, the ruling class changes, from the Winter Queen, ruler of the technologically inclined Winters to the Summer Queen, representative of more simple, working class folks called the Summers. But the Winter Queen has other plans; she doesn't want to give up her crown in ritual sacrifice. To avoid this, she plants a clone of herself in the Summers so that at least her genes continue to rule the world.

The clone, a young girl named Moon has aspirations of being a sibyl, a mystic that taps into mysterious founts of knowledge, while her beloved, Sparks, decides to move to the big city, but when he arrives, he becomes the corrupt consort of the Queen.

Moon travels to the big city to rescue her beloved, but finds herself swept up in a conspiracy of smugglers and freedom fighters, men and women looking to stop the Queen from continuing to harvest mers, sea creatures whose blood provides immortality to those who drink it.

As the big Change approaches, Moon and her friends conspire to change everything about Tiamat and stop the ruthless corrupt Queen from completing her plan.

The Snow Queen is conversely epic and not epic all at the same time. There's space travel, black holes, robots, alien lifeforms, and a centuries old mystery at the heart of it, but even with all of this space opera stuff, I never got a sense of epic scale from the book, and that's because of Vinge's tendency to keep scenes small and intimate. Every scene is brief and usually contains a conversation between two people. This isn't necessarily a bad thing, but it does detract from the size of the book.

I don't think Vinge is interested in trappings of space opera. She absolutely loads the book with excellent imagery: Moon, Tiamat, queens, sibyls, and all sorts of angry men saying ignorant things about the lesser gender. This book is about the female, through and through. The name Moon gives a female character a more mythic base, considering we've always associated the moon with the female. Same with sibyls.

But Vinge isn't a one-trick pony. She also sets up a more subtle layer of identity issues. One of the more important elements of the ritual is the donning of masks. Throughout the book, the identity of Moon and Sparks comes into question. Who they thought they were, they aren't, and what's more important than that is who they become, when they finally remove their masks. When Sparks becomes the consort, he changes names. When Moon returns to the city, she takes on the guise of the Winter Queen. She struggles with who she is - is she the Winter Queen or her own person?

All the imagery and the world-building is clever and imaginative One doesn't have to be an expert to know where things are going. The conclusion of the novel has everything put in its place in a nice little bow. Half of the book is just putting pieces back where they started so that it can end.

Also, it doesn't help that Vinge's prose is simply boring. Straight up boring. She takes the time to describe everything that needs to be described, and she sometimes does so with nice lyrical prose, but for the most part, her prose is an exercise in blandness and tasteless. Her style is one of no-style.

I'm ultimately on the fence on The Snow Queen. I enjoyed the imagery and the metaphors, but that doesn't save the book from its predictable plot and flavorless prose. If only Atwood had written this book and not Vinge, then we'd have got something astonishing. Most of the time, I liked The Snow Queen, but I didn't love it. I won't read it again.
Posted by matthew.