The Towers of Silence

Now we reach the three quarters mark of my long and winding trek through Paul Scott's Raj Quartet. So let's get into it right away. 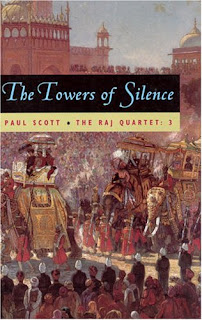 The Towers of Silence is an interesting animal in relation to the other books in the series. Often the penultimate chapter of a series is setup, putting all the final pieces in place before endgame. But the Raj Quartet is not about endgame or moving pieces around the board, which makes the third volume somewhat different. Structurally speaking, the whole series has been about telling the same important events, but from as many perspectives as possible. I found that this led to complaints in regards to The Towers of Silence; the novel was a re-write of the second volume. I did not find this to be the case.

The third volume follows very closely Barbie Bachelor, a minor character introduced in the previous book as a live-in companion to Mabel Layton, a step-grandmother-in-law to Sarah and Susan Layton. Barbie is a former missionary and schoolteacher and distant acquaintance of Edwina Crane, the self-immolating schoolteacher from The Jewel in the Crown. Barbie moves in with Mabel, and ingratiates herself into Mabel's life.

Events from the second novel are re-examined, such as Susan and Teddie's wedding, Teddie's subsequent death, the birth of Edward and the death of Mabel. At no point did I feel bored by retreading the same ground. Barbie is a complicated character, and Scott offers her and the reader a different angle by which to view these events. Detail not previously available to Sarah (as per The Day of the Scorpion) is readily presented to us in this book, layering our vision of what happened.

However, Barbie is not the only central character in this book. Teddie gets a chance in the spotlight for an extended sequence in which we're introduced to Merrick through Teddie and their brief conjoined military career. In the last book, Teddie was often accused of being shallow or cold or obsessed with the grandeur of the old school, but with this novel, Teddie is drawn more deep, making him a counterpoint to Merrick and thus to Kumar.

I said in the last review that the Raj Quartet is all about comparison of different Englishmen and women to each other, and how none of them have escaped corruption by the occupation of India. This holds true for even this volume. The towers of silence themselves, as an image, is reverberated through the focal characters, in an direct and sometimes ironic sense. Barbie is extremely chatty, but caring for a tower of silence, Mabel, affected by the deaths of her husbands in India. Barbie herself ultimately becomes a tower of silence.

The symbolism that Scott has been building upon becomes intricately layered with this book. In the first book, we have the jewel in the crown, specifically an allegorical painting of the Queen receiving a crown with a jewel in it. This painting belongs to Edwina Crane, and a reproduction is found with Barbie's property. The scorpion, in the second book, seems to refer to India and England at the same time. The towers of silence refer to the towers of Parsi where corpses are said to be laid.

But with the third book, Scott performs a masterful task of layering the central images. Both the painting, the scorpion and the towers come into play, sometimes with different meaning. Barbie gives her reproduction of the painting to Merrick, the racist policeman, while an English officer explains that the scorpion isn't actually stinging itself to death - it's that its skin is too tender to handle the flames. Its armor isn't strong enough.

I can understand how somebody could be disappointed with The Towers of Silence. I wasn't. I thought I was going to be bored, going over and over the same key events. But if I wasn't into that, then I was missing the point of The Raj Quartet. I'll get into this more when I finish the whole thing, but suffice it to say that the entire oeuvre stands together. It's hard to review one single element considering how intricately connected everything is.

Luckily, this novel is never boring, never stilted, never irritating. Scott's prose is crisp and clear, and his skill with characters is absolutely masterful. I might never forget the cast of the Raj Quartet; they are so well drawn.

The Towers of Silence is a fantastic novel, but it is the penultimate book. I was almost sad to finish this one, not only because of the tragic conclusion, but because it means I'm another step closer to finishing this grand work of art. I cannot understand why Paul Scott doesn't enjoy the same reputation as his more lauded peers. He looms over many authors publishing around the same time, but he's not widely read. That's a tragedy! I look forward to reading the final volume.
Posted by matthew.