Yesterday I posted a giant post about two of my loves: movies and video games. Today, I'm going to post about the third: literature. I read 94 books by the 26th of December. I don't expect to finish what I started today by New Years, so I'm going to call it as the end. 94 books is quite a feat! It's definitely the most I've ever read in one year. Let's take a look:

What did I think of them? Well you know. I reviewed most of them for this blog. You already know which books I loved and which I hated. But let's do what everybody else does and rank them! Nothing like putting an arbitrary system on things as diverse as novels! Without further ado, the top ten books I read in 2010.


10 The Power of the Dog
9 Twilight (William Gay, not the vampire book)
8 Blind Lake
7 White Noise
6 V
5 Still Life
4 Freedom
3 The Siege of Krishnapur
2 The Red Riding Quartet
1 The Raj Quartet (or at least the first three)

So I definitely cheated with spots 2 and 1. That's seven books instead of 2. But whatever it's my blog. Surely someone could argue that both quartets are meant to stand as one singular work each.
The Power of the Dog was an amazing book. It was long, epic, fast, fierce and read like Ellory on speed, if that's possible. While it's not the deepest or most literary of all my choices, it represents how to do genre fiction properly. It's doesn't have to be stupid.
Twilight by William Gay was a spectacular surprise. I just randomly picked up his three novels from the library because I wanted to read some Southern fiction, and I was blown away.
Every time I read a Robert Charles Wilson book, I'm pleased as punch. Blind Lake was a typical Wilson book, but typical is not really a good word to describe the experience. Again, it's genre fiction done properly.
I can't believe I hadn't read White Noise until this year. It was astonishing good. I even lent it to a friend, and I never lend books, that's how much I thought of it.
V was a great ride, funny, accessible, giant, epic and always entertaining. I read a bunch of Pynchon this year, and I think V might be his best novel I've read by him. Also a book I lent out.
Still Life is Byatt's best novel, of which I've read 6. Byatt is a writer's writer, for sure. She throws everything she can into the pot, and sometimes this works and sometimes it doesn't. Still Life however, manages to be human, emotional, intelligent and gripping.
Freedom was a great read. And it's going to be read over and over again by the literati. It's a big important book and it was really good. I really liked it.
The Siege of Krishnapur would have totally dominated this list if it wasn't for the two quartets. I had no idea what I was getting into when I started it, but I absolutely adore this book. I think of it from time to time and always with fondness, a true sign of quality.
The Raj Quartet, even though I haven't finished it, manages to loom over all of 2010. It's a fascinating byzantine and crystalline work of art and it's truly criminal that people don't give Paul Scott the recognition he deserves.

General thoughts:
My desire to keep with classics petered out rather quickly as I strayed from genre to genre throughout the year. As always, genre fiction remains a go-to book for me, be it noir or science fiction or what have you. However, reading classics and classics of genre seemed to be a winning formula, considering there's only maybe 5 books that I hated throughout the year. 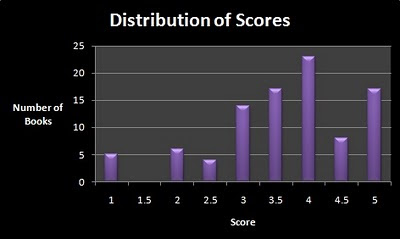 Using an arbitrary scoring system of 1 to 5 with half-steps between, here's a chart that took me ages to make that shows that there is no Bell Curve. Since I tried to read classics, scores ended up being closer to 4 than anything. In fact, the average is 3.63 out of 5 for the entire year. Not bad! As you can see, only 5 books ended up with 1, the lowest score I could give.

I want to continue with the Bookers, of course. I'm over halfway, but that doesn't mean I should slack. I kind of left some clunkers on the list left to read, and it's going to be difficult reading the more esoteric or controversial choices.
In no particular order, here are the top novels I'd like to complete in 2011

Wish me luck!
Posted by matthew.