This is my fourth Atwood novel that I've read. I think I'm going to read more of her work, but with a lengthy break, as her novels tend to overlap in theme and scope. This one, however, Alias Grace, is a different animal than her previous books. 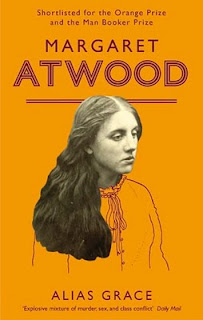 Margaret Atwood is a maximalist, a structuralist, and a formalist, although I'm sure people would dispute. Her novels tend to have a rigid structure, a specific form that she adheres to, and above all, she throws in everything she can into the book. This is especially true of Alias Grace. The novel is made up of two narratives, as well as letters, quotes, extracts from newspapers, letters, articles, poetry, and even a couple drawings of the woman herself. Alias Grace has a very large canvas and Atwood uses every inch to create her intricate game of trickery and symbolism.

And it's an intricate game, all right. Alias Grace is historical fiction based on the real life nineteenth century murder case in which Grace Marks was imprisoned for life and her alleged accomplice hanged. The narrative follows Dr Simon Jordan, a member of the burgeoning field of psychology as he interviews Grace sixteen years after the murders. Simon gets Grace to tell her story from her humble Protestant Irish beginnings, to the journey across the sea to Canada, to her first few jobs as a servant, and finally, when she became an employee of Thomas Kinnear, and ultimately ended up being involved in his brutal murder.

Just like in The Blind Assassin, nothing is as it seems. Atwood has pulled off a very mighty con game with Alias Grace, and she does so in the most subtle and clever way possible. Now, this isn't to say that there's some ridiculous twist ending, or even a solution to the murder. This isn't Miss Marple. The con game is that the reliability of Grace is questioned, and it cascades upwards, from Grace to Simon, from Simon to the author, from the author to the reader, where the reader is questioning the reliability of the author. Atwood is asking the reader to think really hard about historical fiction, and the supposed art of forming a narrative from fact. Can it be done? I think Atwood eventually concludes that it cannot.

The motif of quilting and knitting and weaving plays very heavily in Alias Grace. It's an image that at first glance, seems obvious and kind of pretentious. That is to say that stories are often compared with weaving, and sometimes stories are even called yarns. But Atwood goes further. Weaving and liars often go together too, and so do liars and stories.

But all of this is academic, and one begs the question, is it any good? It doesn't beat The Blind Assassin, but it comes close enough to start eclipsing. On the surface, Alias Grace reads like a murder mystery, and it's a ripping good tale. I was never bored and I was never confused, and Atwood keeps the dual narrative flying (she even manages to perform a couple feats of narrative trickery in how to present memory loss). Both Simon and Grace are fascinating characters, complex and frustrating and sometimes likable, and they are characters. Don't let their historical origins fool you.

Alias Grace is a great novel, but it's not perfect. Up above, I mentioned that Atwood is a maximalist, and this sort of works against her in this book. She includes excerpts from the "confessions" of the alleged killers that were taken down during the first parts of the trial, and she includes poems and songs influenced by the notorious crimes. Atwood is going for more of the "question the truth" theme, by introducing various perspectives, but it's just too much. At least 50 pages are taken up with these epigraphs and excerpts, spread across the novel. Even without reading them, the reader would still come away with the same sneaking feeling that all is not as it seems. It's a crime of overkill.

The book is ultimately great, even with a little bit too much on the structure and form. Atwood keeps the reader's attention so firmly fixed to the book that I had trouble stopping even when it was bedtime. I really liked this book, and it's really worth a read, and it's worth talking about in a critical sense. Atwood keeps reminding people with each successive book that she's easily one of the smartest novelists ever, but she still remains a topnotch storyteller.
Posted by matthew.