Australia. Never been there. Always wanted to go. Sexy accents. Awesome beaches. Scary wildlife. It's an amazing country. And with that, there's some amazing film coming out of the country. Can't say that I've seen everything. Or a lot. Or anything, really. Just movies here and there. I have been on the market to see Animal Kingdom since I first heard about it half a year ago. I love crime stories. Of genres of movies that I will watch no matter what, crime movies are pretty much number one. Animal Kingdom came out in 2010, and one of the supporting actors got a nomination this week at the Oscars. 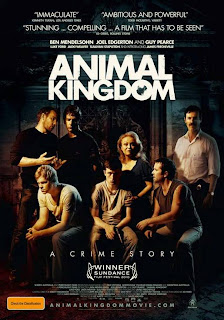 Animal Kingdom is based on the true story of a family of bank robbers. When his mom dies, "J" goes to live with his estranged grandmother, and her brood of bank robbers. "J" meets the three uncles and their partner in crime, and slowly gets twisted into helping them. When the cops make it violent, the family responds, and it escalates, until J is a center of a struggle between the head of the armed robbery division and his eldest uncle.

I give the barest of outlines because I want to avoid spoilers. This is a movie that you don't know where it's going at all times. You think you're following it down one path, but it turns away from the predictable.

I've been harping about reality and art and purpose and story the past couple posts. I'm probably going to do the same with Animal Kingdom, but in a more positive way. I liked it. I thought it was a well-acted, well-written drama, but it could've done with some trimming. It's a bit too long, and the pace suffers as a result. That doesn't mean I was bored senseless at any point during the movie - it just could've been a little faster.

Story is key with this movie. This is a good fucking story. It's a crime movie, it's a character study, it's a family drama, it's a social movie about Australian crime. It's fucking fantastic. There's a lot going on in here, but the director keeps things fairly focused, and by that, I mean he keeps the focus on the plot.

I mentioned that the plot twists and turns a little, but not in the showy "twist" kind of way. Every time something shocking happens, it's built organically. It comes from the characters and the situation, not from the screenplay. This is a very fine distinction and a lot of movies seem to get this wrong. Changing the dynamic of the character by revealing a hidden past or motivation is not necessarily bad, but it must serve the story, rather than serve the audience.

I've been reading a little bit of David Mamet the past while, and he says some interesting things about film. He says that getting the point of the scene across the audience is the most important job of the director. The actors, the set, the props, etc, are all meant to convey the scene. Obviously the director of Animal Kingdom understands this. He understands that flashy camera work and over the top violence are just window dressing. It's all superficial if you don't have the story there.

There's violence in this movie. Shocking violence. Some of the loudest gunshots I've ever heard in a movie, frankly. But it's never cartoonish, and the audience consistently feels the weight of that death, the senselessness of it, the heartbreak.

Crime is a real facet of society. It's built into society. Animal Kingdom is a movie about the toll of crime, about its destructive powers on the individual. J's grandmother, Smurf, as she's called, does things in defense of her family. Her boys are the most important thing to her, but they're submerged in crime, wallowing in it. She descends to their level. It costs her. It costs the family.

The cost of the things we do is something rarely explored in art. We revel in the violence, we revel in the action, but we mistake the cost of our actions. Animal Kingdom is a movie that doesn't shy away from cost.

It's a good fucking movie. Animal Kingdom might be one of the better crime movies I've ever seen. It's finely acted, well-directed, the screenplay is amazing. It explores some similar themes that Heat and a million other ones do, but its story remains fresh, and unpredictable. If you get a chance to see this, do so.
Posted by matthew.