The End of the Affair

Graham Greene is one of those writers that I've always been meaning to read. He's written, like, a million books and some of them are considered "the best ever". In my continuing and pretentious quest to read "classics," I decided to go with Graham Greene's The End of the Affair, so let's take a peek. 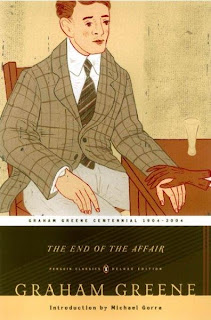 It's 1946, the war is over, and London is slowly healing from the Blitz. Maurice Bendrix, famous writer, runs into one of his acquaintances, whom he hasn't seen in 2 years. Henry Miles, mid-level civil servant, and on the way to peerage, is having problems. He suspects his wife, Sarah, of adultery, and he tells Maurice he's contemplating hiring a private detective.

Unbeknownst to Henry, Sarah did have an affair, but with Maurice during the Blitz. Maurice is still smarting from the abrupt end of the affair, and in a moment of perverse morbidity, he offers to hire the private detective.

The detective, a working class bloke, and his son, follow Sarah as she moves around, even following her when she has lunch with Maurice, after not seeing each other for years. The detective even pilfers Sarah's private journal, in which her most inner thoughts are shared, and her bizarre relationship with God.

It seems that Sarah ended the affair with Bendrix because of a moment in the Blitz, when Sarah thought he was dead. She made a pact with God, saying that she would end it if Bendrix was left alive.

Now that Bendrix knows the circumstances of Sarah's mysterious conversion to Catholicism, he presses upon her to resume the affair.

Apparently Greene was a Catholic, and this is one of Greene's more explicitly Catholic novels. If I had known that, I probably wouldn't have picked this as my first Greene novel. The outcome of choosing this particular book is the religiosity left a sour taste in my mouth, as I am not religious even in the slightest.

At first the book appears to be taking a fairly hard stance against the arguments for the existence of God. Bendrix goes out his way to tell us that if there is a God, he's a spiteful hateful thing, like the humanity he allegedly created.

However, this doesn't last. At the end of the book, there are a couple miracles, and Greene bends over backwards implying they might be supernatural. The caustic atheist Bendrix even gives in a little and allows for the existence of God.

I thought, maybe if there's something besides the Catholicism, I can enjoy The End of the Affair. But alas, I found little to please me. I found Bendrix to be such an annoying and obvious narrator, more inclined to tell than show, and the clearly autobiographical details to be intrusive and very affected.

Bendrix is a fairly terrible person. He yells at Henry after a particularly devastating moment in Henry's life, and reveals the truth about Bendrix and Sarah's affair. He even yells at Sarah, and tells everybody who will listen that Sarah is not a good person.

He's self-centered, egotistical and pretentious. Here's where somebody points out that just because a character isn't perfect doesn't correlate to a bad book.

Well, sometimes the protagonist can be so distasteful as to marr the reading experience. And this is one of those times. I found Bendrix to be so repulsive that I concluded the same about the overall novel. Mix into this the Catholicism, and you've got the recipe for a book that I just did not like.

One of the most common criticisms to be leveled at Greene is his workmanlike prose, and The End of the Affair is no exception. (There's a bit in this book where Greene addresses these criticisms by having his fictional counterpart metaphorically shrug and says "what of it?") The End of the Affair has very little to recommend, unfortunately. I found Greene's limp prose even dampened the romance at the centre of the book, removing passion and replacing it with theology.

The End of the Affair was a disappointment on an epic scale. I didn't really enjoy reading it, and the only reason why I finished it was because of its short length. Even if I was religious or Catholic, I would have found this book to be objectionable on literary grounds: the characters were awful people with little merit and the prose was boring and prosaic.

It's a shame, because I really wanted to like Greene. I think I'm going to read another of his books, one of the less Catholic books, one of the African set novels, a subject I'm interested in. Keep checking back to see if I ever do read something by him again.
Posted by matthew.