I had no idea what I was getting into when I started reading Ford Madox Ford's The Good Soldier. I thought it was a modernist novel about a soldier in the Great War. I thought Ford was an American. I was wrong on both counts, that's for sure. Widely wrong. Allegedly one of the greatest novels of all time, The Good Soldier is not about the Great War at all, but it is modernist. 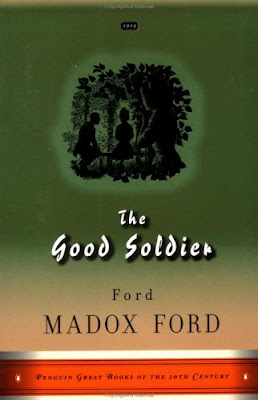 Dowell and his wife Florence are rich Americans living abroad in France. They have made friends with a rich upperclass couple of Edward and Leonora. Over the course of nine years, they do things together, travel, have tea, share a newspaper. But Florence and Edward are having an affair, and it has disastrous outcomes for all involved.

At 240 pages, The Good Soldier is a slim volume, but it packs more into 240 pages than any other novel of a similar length. I've never read anything quite like this book. It's often heralded as a masterpiece of narrative and modernism. I would love to go back in time and see how contemporary reader reacted to this startling and off-putting novel. How would they make head or tails of something so different and alien, something that questions the moral fabric of society itself, something that questions the novel itself? What would they say?

Well, obviously I have no device for time travel. All I can do is think about The Good Soldier and try to organize my thoughts in a more coherent way than Dowell's narration. That's the first thing anybody would notice about this book, so let's start there.

This is one of the first examples of a decidedly nonlinear approach to storytelling. Dowell's first person narration is disjointed and mixed up. He has problems sorting order from the chaos of his wounded mind. Ford's fractured chronology isn't terribly hard to follow. There are a couple bits that I had trouble keeping in the correct order, but nothing that detracted from the emotional content or the overall plot. It's pretty seamless.

Dowell, as a narrator, is the classic, and I mean classic unreliable narrator. The most interesting and probably most complex in terms of theme is Dowell himself, even if he tries to talk about everything other than himself.

Dowell has been constantly duped by his wife, lover of many people during their marriage, and he almost never suspects a thing. Even when Leonora comes close to revealing the truth, Dowell metaphorically covers his ears to avoid the painful truth. That's the reader's very first clue that you absolutely cannot believe everything he says. The fact that his chronology is mixed up is the other clue.

The key to this novel lies with Dowell's inability to face reality. No matter what happens, he still thinks fondly of Edward, because he's "good people" - but not in terms of morality, rather in terms of class and background. He decides at the end of the book who the heroes and villains are, but we can't trust that because we can't trust his judgement.

I can't say I really enjoyed reading this book like I enjoy reading things. I appreciate the novel. I think it's complex and worthy of discussion, but I didn't really have a good time. Part of that was the language Dowell uses. I don't think Ford has Dowell use such obfuscating narration because it's a character trait - I think that's the way Ford writes. And it put considerable distance between me and the text. Ford dances around a lot of ideas using Dowell, and it makes clarity sometimes fleeting.

The Good Soldier is a big book squeezed into a little one. It's a spectacular example of modernism, nonlinear chronology, and unreliable narration. It's also a brilliant examination of the terrible things people do to each other. But it's not a fun read, and it's dense and sometimes opaque. I liked it, but I never really enjoyed the experience. I will read something else by Ford, probably his quartet, Parade's End. Hopefully that's not quite as affected as the prose with this novel.
Posted by matthew.