William Faulkner is a shadow that looms over literature, and especially Southern fiction. Every time I finish a Faulkner novel, I'm always excited to read another one by him, but I never do. It's in part to the impenetrability of his sentences and archaic descriptions, and also in part because of the sheer complexity of the book. There's a lot of work to be done when reading a Faulkner novel, I find, but most of the time it's worth it. 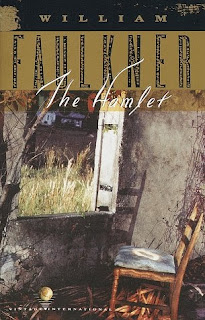 The Hamlet, the first of the Snopes trilogy, has been sitting on my shelf for almost 4 years now. I purchased an antique boxset of the the trilogy and have always meant to read it. Every time I start it, though, I'm just not in the right mood. I've read the first 10 pages probably 10 times. But no longer. I finished it.

Flem Snopes, and his family, move into Jefferson, and very quickly ingratiate themselves into the town's economic system. His father, Ab, has a history of difficult to work with, and the rumour of barn-burning follows him. Flem takes a job as a clerk in the store owned by the town's most prominent businessman, Will Varner. Slowly but surely, Flem moves up the economic ladder, eventually marries the Varner's precocious daughter, and owns the old mansion. In a series of swindles and tricks, Flem comes to figuratively own the town.

The Hamlet is mixed up and confused. It's not sure whether it wants to be an episodic picaresque, or an important novel about the South's neverending problems with money. Faulkner lets the narrative twist and get lost in eddies of tangential flashbacks. Not all of it is necessary for plot, but it's included nonetheless.

The absolute strongest part of the novel is in the middle, when Eula Varner's backstory is given, and then the circumstances around her marriage to Flem Snopes. It's a very tight (longish) short story and extremely evocative of the time and place that Faulkner wants to immerse the reader in. The section even does double duty of advancing Faulkner's pet themes of archetypes and classical allusions, giving the South's a sense of ancient history.

The worst part of the book is easily the last part of the book. It's a long and rambling story apparently cannibalized by a previous short story about a horse swindle, in which some guy buys a horse from a hustler and then gets trampled by it. Afterwards, this man and two other characters get involved in a "salt gold mine" hustle prepared by Flem. The punchline is good; the delivery is slow and winding. It feels like work to get through the last section, and not the good kind of work - the slogging kind.

However, all is not lost. While The Hamlet feels slight and airy, Faulkner's presence stops it from being disposable. His vocabulary is precise and his attention to detail even more so. He spends the time to develop his characters, elevate them beyond Southern stereotype, and give them the history and respect they deserve.

The Hamlet is a good book, but clearly not Faulkner's best. It's a little too scattered and unfocused, and the final section is a chore. However, the rest of the book is strong. Even a bad book by an author like Faulkner is actually better than most novels published. I'm going to take a break from Snopes, but I will return and read the next book.
Posted by matthew.