When you watch a movie, there's certain things you don't notice because you're supposed to be engaged with the scene, the characters, the plot. Some of these things include lighting, set design, costumes, and composition. Composition refers to staging, how images are framed. A lot of this has to do with the rule of thirds. Here's an example of almost perfect composition, from Woody Allen's Manhatten. 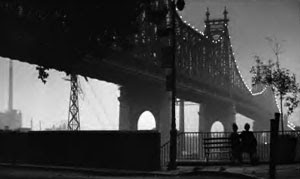 If the composition is off, the staging bizarre, characters off to the side without proper contrast, then it can be distracting. I'm not usually distracted by something like that, but The King's Speech consistently made me wonder what in the world the director was thinking when he framed shots.

There are a ton of instances where the director, Tom Hooper, framed his shots by having the character on the far left of the screen, and nothing on the right. This can be off-putting because I had no idea where to rest my eye. If my eye wanders, then so does my mind.

This is a shame because the screenplay for The King's Speech is quite good and the performances immaculate. Even though Geoffrey Rush is the one most acclaimed in this movie (and deservedly so) but Colin Firth's Bertie is stellar. It's not as flashy as Rush's, but it's an excellent example of seamless acting. At no point did I ever believe Firth was not Bertie. It's an instance of sublime acting.

Bertie, the Duke of York, has a stammer and no doctor or therapist has been of any help. He and his wife enlist the help of the controversial speech therapist Lionel, in order to help Bertie speak on the new medium of radio, which will no doubt take over the world.

The problem with historical fiction is that the end is usually known. The screenplay has few secrets, and the viewer will know the story beats as they come. However, as aforementioned, The King's Speech acknowledges that aspect, and lets the sharp dialogue do all of the heavy lifting. There's no spots that drag, and

I don't think I loved this movie, but I'm filled with indecision on my opinion. For one, I found the composition distracting and irritating. Hooper shot quite a few scenes from an extreme looking-up angle, causing Rush and Firth to have giant heads and smaller bodies, and more often than not, put them on the side of the frame for no discernible reason.

The King's Speech is an enjoyable way to spend two hours but after watching it, I felt it go through my hands like sand. There's nothing to hold on to other than some funny lines and a couple of good performances. One can't hang an entire experience on acting. While watching the movie, I was liked it, I was entertained, but afterwards I feel empty, like it had never happened. There was no catharsis - I was distanced from the movie, and I think this might be because of its bizarre direction. I was never immersed, something which is mandatory for historical fiction that I already know the outcome to.

This has been a strange review because I'm not even sure what I feel about the movie. I feel weird about it. I feel like I didn't watch it, but I have the memories to prove it.

Meh. Whatever. It's going to win Oscars, you can bet on it, and its actors are deserving of it. Which is weird to think of. Deserving. Deserving. Like they deserve accolades for impersonating the trials and struggles of real people, people who loved, who stubbed their toes, who farted, who had their hearts broken, who made love, who did all these things, but acting never includes any of that. Acting never includes reality. It's always an artifice with bits and pieces of reality weaved in to support the artifice. Though, we've elevated actors to the realm of gods.

Actors weren't always the top of the heap, you know. In fact, they were scum, mistrusted and scorned. And why not? Their whole career is built on fabrication. That's not trustworthy. That's not admirable. Yet, actors grace every page of every magazine and we fawn over them and we love them.

I can't say I'm any different. I have my favourites. I have actors that I look forward to seeing: Christian Bale, Jeff Bridges, David Tennant, Tom Hollander and whoever the fuck. They're just people pretending to be people, but they're charismatic or engaging and that's what draws me in. Do I give a shit about their lives? Well... I used to. I think I'm over that.

The most important thing to me now is story. Story, story, story, story. You can't have a good movie, book, comic, whatever without a good story. Acting, direction, cinematography, all of these things are meant to prop up a story, but it should stand on its own two legs.

Is The King's Speech a good story?

Sort of. I guess. The outcome of it all, that King George VI helped his country get through its darkest hour through the medium of radio isn't a good story. So the screenplay dramatizes it up, makes it more cathartic for the viewer. There's no catharsis in World War Two.

I started this post with the intention of reviewing a movie with good performances, decent dialogue, irritating and distracting direction, and a lack of catharsis. I've said all these things. But to what end? This is the existential movie review of the year for you.

Do we watch these movies because we want to watch the movies, or just stay in the loop, stay with the zeitgeist? Does anybody even care about King George and his stammer anymore? Not to sound harsh. I'm sure it was terrible going through that, and it must have been very relieving to work through those issues. But does it matter?

People are dying of AIDS and the Pope won't allows contraception for Catholics. Homeless freeze to death. Young single mothers go through endless cycles of abuse, drugs, disease and hopelessness while their babies starve or end up in the same cycle. Drug addicts steal from their own family to fuel urges beset by callous dealers who are only dealing because it's the only way to live, to survive, to make sense of the world. Middle class people live in debt for their entire lives, hoping for their retirement investments to stay afloat.

And here we are talking about a movie where a monarch, a powerless figurehead, has daddy issues and has a stammer?

Actually, you know what? I'm decided on this movie: I'm putting it out of my mind. Never thinking of this movie ever again.

End of review. I'm going to have a beer.
Posted by matthew.

nice review, man!
I can't wait to see that movie :)