The Return of the Soldier

Now here's a slim volume for you that is impressively deep. I just picked this up because I'm always interested in the First World War's literature. So much amazing work was done in response to the Great War. This is one of them, and at a meager 185 pages, this packs a punch. 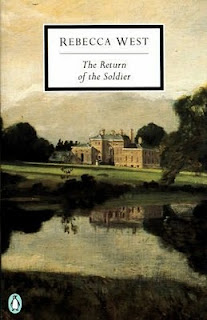 It's 1916 and Chris Baldry has come back from the front, suffering shell-shock so severe that he has amnesia. It seems he doesn't remember the past 15 years, including his wife Kitty and their deceased young son. However, he does remember Jenny, his cousin, who narrates the story, and he remembers a beautiful girl of humble origins named Margaret, whom he loved so fervently for a year. But it's 15 years later in his perspective, everybody is old, and Margaret has been married. The three woman must decide whether to let him be, happy as a child, or to return him to his own present.

This was a very strong book. Rebecca West published this when she was 26 years old, the same age as I am. While this isn't necessarily a war book, this is written in direct response to the men coming home from the front and being devastated.

This is also a book about the great social change being brought about by the war and by natural means. The archaic class structure, so rigid in England, is being criticized in The Return of the Soldier, but it's all with such a subtle and careful hand.

Jenny, the narrator, is the Nick Carraway of the novel - which is to say that even if she isn't the focal character, she is one of the most interesting for the little things she says and refers to. Jenny is aged thirty in the novel, unmarried and devoted entirely to Chris, and to a lesser extent Kitty. But all of this is shattered by the revelations revealed by Chris and Margaret about their love affair, 15 years ago. It seems Jenny's never felt such passion or happiness and is weak of jealousy over it, but she never really says it explicitly. She says that she's jealous, but everything else is very carefully implied.

Even the imagery Jenny uses is fascinating. Her language in regards to Margaret changes very subtly: Margaret is described first as a dirty, pitiable creature, but then slowly, she begins to be referred to in saintly terms, with images of whiteness, angels, and holiness. Until eventually, the comparison is made explicit and Margaret becomes the White Goddess.

How Kitty and Jenny react to Margaret is as important as Chris' reaction to returning home. Kitty sees Margaret as poor and destitute, but we find out that Margaret has had a rich inner life, full of passion and love and lust, a real life. She's also lost a baby as well.

I haven't really discussed Chris because I didn't find him as fascinating as the three women. The return of the soldier, the title itself is a sort of Byatt-style pun. He comes back from the front as a different man, but eventually, his amnesia falls away, and the soldier in him returns.

The Return of the Soldier reminded me a lot of Kate Chopin's The Awakening, not just in terms of length. In both novels, the female focal character awakens to a reality beyond being a wife or an attachment to a man. Both Jenny and Edna are emotionally complex and have an inner struggle against their class and their position in society. Whereas Edna's awakening goes further, Jenny still benefits from the revelation of a new world. Unlike Edna, Jenny's awakening is at a terrible cost: at the microcosm, her cousin's happiness and at the macrocosm, society due to the Great War.

This is a fantastic novel. West's prose is careful, and her exercise in first person narration is very ahead of its time. Her use of symbolism and imagery is quite clever, and the novel can even take an allegorical interpretation if you wanted to (Margaret represents the mother, the old country, Kitty represents the new society, etc etc etc). The fact that the novel can support so much criticism is a sign of excellence.
Posted by matthew.