This is going to be the first book of 2011 that I finished. I had decided to read this book because I had wanted to take a smidge of a break from the two books I'm currently reading: one is very long, and the other is going to be too sad to finish. Anyway, this book appears on TIME's 100 Best English Language novels, a list that I'm very slowly making my way through. That's not the only reason why I grabbed it from the library; The Sheltering Sky is a novel whose subject interests me greatly. 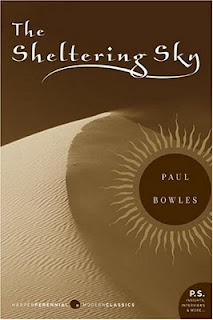 Three American travelers, not tourists, have come to an unnamed North African country. There's Port, arrogant and philosphical. There's Kit, his wife, flighty, perceptive, and always nervous. Finally, there's Tunner, likeable and affable, a companion to the married couple. There's some marital strife, compounded by uncomfortable lodgings and by proximity to the handsome Tunner.

When Port meets a bizarre Australian mother and son duo, he sees a way of removing Tunner from his life and moving on to the next town. However, by pawning off Tunner, Port sets in motion events with disastrous consequences. He becomes deathly ill, but he and Kit can't find lodgings in the town. They must sleep in the French military fort. There, the couple's lives change inexorably.

But then you dig a little deeper, and you get to the weird sexual undertone that hangs around everything like a fog. While Port and Kit don't have sex with each other, they seem to have sex with everything else. Obviously Kit and Tunner have sex while previously Port has sex with a random Arabic prostitute. The bizarre Australian duo, while purporting to be mother and son, turn out to be doing it as well.

Getting to the final third of the story, once Port has succumbed to his illness, Kit seems to go off the deep end and gets raped by an Arabic caravan. Hence the superficial horror aspect, as there's nothing scarier than a dirty brown person having relations with a beautiful white lady.

Bowles isn't so crass or simple as to craft a story about how frightening other races are. This is an epic psychological exploration of the three characters, how the emptiness of the desert reflects their inner lives, how they use sex to fulfill that vast emptiness, how their naïveté is their downfall.

I was certainly enthralled the entire time I read this book, up until the brutal and bleak final section of the novel. It's hard to believe that The Sheltering Sky is a first novel. Bowles shows great restraint with the prose and the characters.

There's a ghastly opportunity here for a lesser writer to have wrung more sexual leering out of the situation. Or to have exploited the setting, which is of vast importance to the plot and to the story. But at no point does The Sheltering Sky feel exploitative or exceedingly moral. It helps that Bowles' prose is clear and evocative, but without being too flowery or too sparse like Hemingway for example.

What I didn't like about The Sheltering Sky was the final section, with its languid pace and bizarre turn of events. This might be more because of my emotional reaction to the situation, rather than to the technical aspects of it. It's brutal, and might even be overly brutal, but I suppose it serves a point.

The Sheltering Sky is a powerful, complex work. The characters are extremely well mined for psychological insight and Bowles controls them with the skill of a more expert novelist. I was really impressed by this book, and I think I will take a look at another of his novels.
Posted by matthew.