I wasn't sure if I wanted to do two posts about this book, or just wait and do one. The reason why I hadn't decided up until now was that I'm reading it in two installments. In paperback, Speaks the Nightbird by Robert McCammon is split into two volumes. I just finished reading the first volume. It's my blog, which means it's my decision. 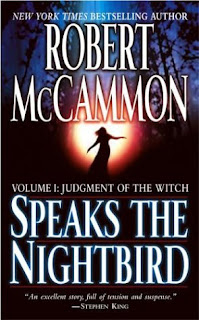 It's 1699, a magistrate and his clerk have been called to the small settlement of Fount Royal, deep in the Carolinas. It seems they have a witch that needs to be judged by the law. The clerk, Matthew Corbett, is astonishingly astute and clever, and as soon as they arrive to the town, they see all it not as it seems.

I read McCammon's Swan Song last spring, so about a year and a bit ago, but I never bothered to blog about it, among other books I wasn't reviewing. His reputation, in my mind, was of Stephen King-clone, but more hardcore. Reading Swan Song kind of reinforced that notion. Swan Song, his Stand, if you will, was strong but derivative and the ending a little obvious. Looking at his catalogue, I saw McCammon left horror fifteen years ago, but couldn't find a publisher for his historical fiction. Finally somebody decided to give it a try and published Speaks the Nightbird, a giant 1,000 page novel about a witchcraft trial.

I'm very pleased I decided to give this book a try. Very pleased. That isn't to say that this first volume is without its flaws, but then again, what book isn't? Firstly, McCammon, though a professional author of more than 10 books, cannot keep his point of view in rein. This is the ultimate in third person omniscience, as McCammon gleefully hops into the heads of a myriad of characters, and once, even within the span of the same paragraph. He predominantly follows Matthew, obviously, but then skips around a little to the magistrate, and sometimes hops into the head of the doctor or the town's resident rich man. While it's a little bit distracting, it's not a deal breaker. It's certainly outweighed by the novel's positives.

The mystery of the book is clearly not supernatural. It's obvious from the fact that Matthew is characterized as being a slave to logic and reason. Having a supernatural explanation would betray the character (whom has further adventures) and be a cheat to the reader. It's a mystery, and it's a complicated one. Or at least the details are. Even the most naive reader will deduce that there's a conspiracy afoot in the town of Fount Royal, and the witch is innocent. It's just a matter of the what's and how's to be sorted in the second volume.

In addition to a nice complicated mystery, there's McCammon's surprisingly vivid description. For a lesson on how to immerse the reader in history, look no further. McCammon has done copious amounts of research and it shows, but not in an overly intrusive way. He gives the world believability, but never does the description reach a level of didacticism. In fact, McCammon's narrative voice is often fun and light. There are a couple instance where I chuckled out loud at a clever turn of phrase.

While the specific narrative voice is different, I was reminded a lot of Neal Stephenson's Baroque Cycle, where both books treat historical people as being real people, who shit and piss and swear and sweat. Even if they lived hundreds of years before, they were still people and they should be portrayed as such. I don't think either author was a slave to historical fact when it comes to speech and slang, but that's an artistic choice to keep things readable, a commendable thing I think.

It's hard to pass judgement on half of a novel, but that never stopped me before. I really liked Speaks the Nightbird and I've already got my hands on the library's only copy of the second volume. Wish me luck!
Posted by matthew.